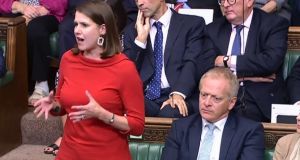 A video grab shows former Conservative MP Phillip Lee sitting next to Liberal Democrats leader Jo Swinson in the House of Commons in London after moving across the House. Photograph: PRU/AFP/Getty Images

Boris Johnson’s government has lost its majority in parliament after former Conservative minister Phillip Lee crossed the floor of the House of Commons to join the Liberal Democrats. The defection came hours before MPs delivered a blow to the prime minister, voting to take over the parliamentary timetable on Wednesday to pass a Bill blocking a no-deal Brexit.

Dr Lee walked across the chamber while the prime minister was making a statement from the despatch box, drawing cheers from MPs in his new party.

“The party I joined in 1992 is not the party I am leaving today. This Conservative Government is aggressively pursuing a damaging Brexit in unprincipled ways,” he said in a statement.

“It is putting lives and livelihoods at risk unnecessarily and it is wantonly endangering the integrity of the United Kingdom. More widely, it is undermining our country’s economy, democracy and role in the world. It is using political manipulation, bullying and lies. And it is doing these things in a deliberate and considered way.”

Dr Lee’s defection, which wiped out the working majority of one provided by the Conservatives’ confidence-and-supply deal with the DUP, came as MPs prepared to vote on a motion designed to rule out a no-deal Brexit. At a meeting in Downing Street on Tuesday morning, Mr Johnson failed to persuade rebel Conservatives to vote with the government despite warning them that they would lose the whip and be barred from standing for the party at the next election.

The motion allows MPs to take control of the Commons timetable on Wednesday to debate and vote on a Bill requiring the prime minister to ask the European Union to delay Brexit until January 31st, 2020, unless he has secured a deal by October 19th. Mr Johnson told the Commons it would allow “our friends and partners” to keep Britain in the EU for as long as they want on the EU’s terms.

“It is without precedent in our history. It is a Bill that, if passed, would force me to go to Brussels and beg an extension. It would force me to accept any terms offered. It would destroy any chance of negotiations or a new deal. And indeed it would enable our friends in Brussels to dictate the terms of the negotiation, that is what it does,” he said.

“Over the last six weeks the government has not produced a single indication of any viable proposal to replace the backstop by any alternative likely to prove acceptable to the EU. The likelihood of the government reaching a deal at the council meeting on October 17th and 18th on the terms the government itself has set is accordingly slight,” he said.

Leader of the House Jacob Rees-Mogg said it was unconstitutional for the legislature to seek to usurp the functions of the executive. And he compared Sir Oliver’s manoeuvre to the parliamentary tactics used by advocates for Irish Home Rule in the 19th century.

“The approach taken today is the most unconstitutional use of this house since the days of Charles Stewart Parnell when he tried to bung up parliament,” he said.

“If parliament tries to challenge the people this stretches the elastic of our constitution near to breaking point. We should recognise that the people are our masters and show us to be their lieges and servants, not to place ourselves in the position of their overlords.”

Former Conservative chancellor Ken Clarke said the prime minister was pursuing a policy on Brexit that is opposed by a majority in parliament. He said pushing through a no-deal Brexit against parliament’s will would set a “horrendous” precedent for the future and claimed the British public was indifferent to issues such as the backstop.

“I don’t think any of the English public – sadly – take any interest in Irish political affairs,” Mr Clarke said.

“Nine out of 10 have no idea what the Irish backstop is.”