David Davis: Deal was ‘more a statement of intent’ than a ‘legally enforceable thing’

Speaking on the BBC's Andrew Marr Show, Britain's Brexit minister David Davis has said that the British government wants to "protect Ireland from the impact of Brexit." Video: BBC 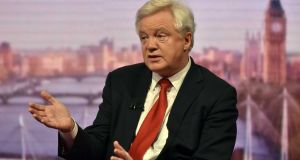 The Government has hit back at a British government suggestion that a deal reached on the post-Brexit Border was a “statement of intent” rather than “a legally enforceable thing”.

The Government issued a statement on Sunday afternoon following the British comments, saying Ireland and the EU will hold the British government to the agreement made last week.

The Government statement pointed to article 46 of the agreement made on Friday, which states: “The commitments and principles . . are made and must be upheld in all circumstances, irrespective of the nature of any future agreement between the European Union and the United Kingdom. ”

A Government source said that because it assumed that the British government would honour its word, it expected the commitments on the Border to be implemented.

The deal reached by European Union and British negotiating teams on Friday set out guarantees that there would be no “hard border” between the Republic and Northern Ireland when the UK leaves the EU in March 2019.

Ireland secured a commitment that there will be no hard border, even if the UK leaves the EU without a deal. A previous agreement had been reached on Monday guaranteeing “regulatory alignment” between the Republic of Ireland and Northern Ireland.

This deal broke down following opposition from the Democratic Unionist Party, which props up the Tory government led by British prime minister Theresa May.

However, on Sunday, Britain’s Brexit secretary David Davis moved to calm fears of hardline leavers in the Tory party, who were alarmed by a section of the agreement which said Britain would have “full alignment” with the EU on regulations and standards that impacted on Northern Ireland. Mr Davis insisted the phrase had been changed from “non-divergence” which would have meant “cutting and pasting” rules from Brussels.

The Brexit secretary said full alignment meant reaching similar outcomes, stating: “We want to protect the peace process and we also want to protect Ireland from the impact of Brexit for them.

The comments came after reports that some hardline Brexiteers had been assured by the British government that the term full alignment was “meaningless”.

Taoiseach Leo Varadkar previously described Britain’s commitments as “politically bullet-proof” and “cast iron”, putting Dublin on a collision path with London at a time when Anglo-Irish relations had reached a low-point.

Dublin responded strongly, stating the deal was “binding” and it would hold the UK “to account” on it.

The Government’s chief whip Joe McHugh branded the Brexit secretary’s comments as “bizarre”. He told RTÉ: “We will as a government, a sovereign government in Ireland, be holding the United Kingdom to account, as will the European Union.

“My question to anybody within the British government would be, why would there be an agreement, a set of principled agreements, in order to get to phase two, if they weren’t going to be held up? That just sounds bizarre to me.

“This, as far as we’re concerned, is a binding agreement, an agreement in principle.”

Mr McHugh said the Government would not “back away” from the Brexit principles if it comes under pressure from the rest of the EU during trade talks with the UK.

Mr Davis also said the chances of Britain leaving the EU without a trade deal have “dropped dramatically”. He said agreement secured with Brussels to trigger talks on a post-Brexit relationship made the prospect of the UK being forced back into World Trade Organisation (WTO) tariff arrangements after withdrawal much less likely.

He told BBC1’s The Andrew Marr Show: “The odds, as it were, against a WTO, or no deal outcome, have dropped dramatically.”

Mr Davis also said Britain will not pay a £39 billion exit bill to Brussels unless there is a trade deal. The comments appeared to contradict those of chancellor Philip Hammond, who has said it would be “inconceivable” the UK would fail to honour its international obligations.

Pressed on the chancellor’s remarks regarding the exit payment, Mr Davis said: “No. It is conditional on an outcome. I am afraid that wasn’t quite right.

“No deal means that we won’t be paying the money.”

When asked at a Commons Treasury Committee meeting last week whether Britain’s divorce bill was contingent on a trade deal, the chancellor said: “Nothing is agreed until everything is agreed in this negotiation.

“But I find it inconceivable that we as a nation would be walking away from an obligation that we recognised as an obligation.

‘Not a credible scenario’

“That is not a credible scenario. That is not the kind of country we are. Frankly, it would not make us a credible partner for future international agreements.”

The Brexit secretary said a trade deal was “not that complicated”, and suggested adopting a version of the agreement the EU made with Canada, which he dubbed “Canada plus, plus, plus” because it would include areas such as financial services.

In the wake of last week’s deal, Dublin believes it is now possible for the UK to leave the European single market and customs union while maintaining a relationship that closely mirrors the existing structures. It could, however, hinder the UK’s ability to strike its own free trade deals, a key goal of some of those in favour of Brexit.

The document agreed between the EU and the UK reached the threshold of “sufficient progress” in the areas of citizens’ rights, the financial divorce settlement and Irish-specific issues. The negotiations are now expected to advance to the next stage, which focuses on the transition period after Brexit takes effect in March 2019, and on the future EU-UK relationship. – Additional reporting: PA