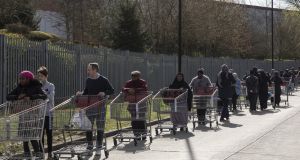 Long queues ahead of the opening of a Costco wholesale store in Chingford, London, as coronavirus crisis intensifies. Photograph: Dan Kitwood/Getty

The stringent new measures Boris Johnson announced on Monday represent a major shift in his government’s approach to the coronavirus, bringing it into closer alignment with other European countries. Until now, Britain hoped to “flatten the curve” of the virus’s spread without introducing severe social distancing measures so soon.

But the virus has spread so fast, especially in London, that the National Health Service (NHS) feared its services would be overwhelmed without radical, immediate action to suppress it. Now, a few days later than countries such as Ireland, Britain is telling its people to stay at home if they can and avoid unnecessary contact with others.

Britain remains reluctant to close schools and chief medical officer Chris Whitty stressed on Monday the virus tended to spare children, ignoring the fact they can become vectors for it. Johnson’s scientific advisers no longer talk about “herd immunity” which would require 60 per cent of the healthy population to become infected before developing immunity that could protect the old and vulnerable.

But Whitty and chief scientific adviser Patrick Vallance spoke enthusiastically about the prospect of an antibody test that could tell if people had been exposed to the virus and were now immune. Such people could then safely take care of others who were more vulnerable to the virus.

Part of last week’s strategy was to abandon testing for people with mild symptoms compatible with the coronavirus. But after the World Health Organisation (WHO) stressed the crucial role of widespread testing in combating the epidemic, health secretary Matt Hancock faced sharp questions in the House of Commons on Monday night.

Former prime minister Theresa May asked why the government stopped testing people with mild symptoms and Hancock said he agreed with the WHO on the need to test more.

Johnson’s announcement on Monday followed days of chaotic and contradictory messages and briefings that left the public feeling more anxious than before. The prime minister will now host daily press briefings to offer updates on the fight against the epidemic.

Some of Monday’s announcements raised as many questions as they answered and publicans complained that, although he told customers to stay away, he did not tell pubs to close so they cannot claim insurance. Other question marks surround how the government plans to support businesses and workers who are affected by the closures, which are expected to last for months.

But the biggest question surrounding the prime minister’s move on Monday is whether it will be effective in curbing the spread of the virus or if it is too limited and has come too late.