Bubbles are bursting all over London under the strains of Covid

London Letter: Many support bubbles entered in haste are being found wanting 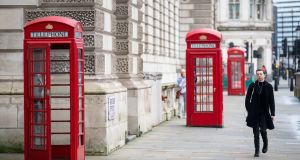 We were leaning against a railing on Cadogan Square, admiring the red brick, the Oriel windows and the Dutch gable on the house where Martha Gellhorn lived. A sharp January wind cut across the square and the paper cups of hot chocolate went cold in our hands as we praised the memory of the great war correspondent.

But a deeper chill surrounded my friend James, who had avoided eye contact since we set out for this walk and was speaking to me now with a kind of long-suffering detachment as if I were a slow-witted stranger.

It was so different a few weeks earlier when our walk took us through St James’s Park and Green Park, along Piccadilly and into Soho. We bought two click-and-collect gin and tonics from a gay club on Old Compton Street, and James took out a small bottle from inside his coat to bring them up to strength.

We enjoyed our drinks and a few peanuts standing at either end of a long, narrow ledge outside one of Soho’s oldest strip clubs, where I spent a miserable hour once long ago when I was still at school. Our surroundings may have been sordid but a second sharpener from James’s little bottle brought a glow to our cheeks as we sketched out ever more optimistic scenarios for the year ahead.

On the way up to Soho Square we passed the only tourists in London, one of them reading from a guidebook while the others pretended to have nothing to do with him. The benches inside the square were full of couples shivering over lunch a couple of metres apart, some of them sharing a bottle of wine or a couple of beers.

Outside the railings we joined a tidy, cheerful queue for the pissoir, a rare and welcome find in central London, even if it smelt like an andouillette that had just been sliced open.

Soon after that walk click-and-collect drinks were banned, and the government warned that taking exercise with one other person must not be a cover for socialising. After some confusing briefings, Downing Street confirmed that walkers could pause for a coffee but they must not turn their rest break into a picnic.

Now on Cadogan Square, James was telling me it should come as no surprise if the rules were tightened further because people were taking too many liberties. “The whole bubble business is being abused,” he announced, sweeping around to pin me against the railings with a wintry glare.

“It certainly wasn’t designed for you to spend the whole of last weekend with your bubble enjoying yourself.”

I told him that was precisely what it was designed for and that the official guidance said members of a support bubble could behave as if they were part of the same household, even if that meant enjoying themselves.

“I suppose it’s all a question of interpretation,” he said.

I was going to contradict him until it dawned on me that his problem was not with my bubble but his own. Months earlier he had formed a bubble with an old friend to whom he is devoted, and the arrangement worked out very well for a while as they went on trips together and met regularly for dinner.

Things started to change last autumn when the friend became increasingly anxious about meeting anyone indoors, including James, until she wouldn’t let him into her house at all. He thought matters might improve when she got the first jab of the vaccine, but she told him she wouldn’t feel comfortable until some time after the second dose.

“I don’t think she’ll ever meet anyone again,” he said.

Bubbles are collapsing all over London, many of them entered in haste before Christmas and found wanting in the grim weeks of lockdown that followed. Soon after our walk to Cadogan Square, James told me his friend Paul had abandoned his Christmas bubble and wanted the two of them to form one.

Paul and James meet for a walk a few times a week, sometimes equipped with flasks of bull shots or mulled wine. They get on very well, and the only source of friction is Paul’s determination that they must go through with their walk even in freezing temperatures or driving rain.

“If he says ‘There’s no such thing as the wrong weather, only the wrong clothes’ one more time I’m actually going to kill him,” James said.

James might have grabbed on to Paul’s offer of a bubble as a lifeline but instead he went into a panic, not wanting to let his friend down if he needed emotional support but recoiling from the commitment involved. The trouble with bubbles, he said, is that every small risk or transgression has implications for the rest of the bubble and even a walk with someone outside must be negotiated or at least reported.

“I don’t think I’m meant for a bubble. What do you think?” he said.

I said I thought he was right. He gave me a suspicious look.