Unregulated free movement would ‘not keep faith’ with Brexit 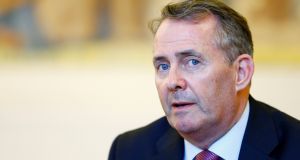 Britain’s international trade secretary Liam Fox: “Control of our own borders was one of the elements we wanted in the referendum.” Photograph: Reuters

Dr Fox insisted the British cabinet has not agreed a deal on immigration after withdrawal from the EU.

The remarks came as British chancellor Philip Hammond signalled there was “broad acceptance” in cabinet of a wide-ranging post-Brexit transitional period lasting up to three years.

Dr Fox told the Sunday Times: “We made it clear that control of our own borders was one of the elements we wanted in the referendum, and unregulated free movement would seem to me not to keep faith with that decision.”

In remarks that are likely to be seen as directed at the chancellor, Dr Fox said: “I am very happy to discuss whatever transitional arrangements and whatever implementation agreement we might want, but that has to be an agreement by the cabinet.

“It can’t just be made by an individual or any group within the cabinet.”

Mr Hammond said on Friday the transitional period up to 2022 would mean “many arrangements remaining very similar to how they were the day before we exited the European Union”.

The chancellor said there would be a registration system in place for people coming to work in the UK after Brexit, during the transitional period.

“If they come here to work after we leave the European Union, during that transitional period, the sensible approach will be to seek to register people so that we know who’s coming and who’s going,” he said.

A British government source told the Press Association that freedom of movement will end when Brexit occurs in March 2019, and a time-limited implementation period would then follow.

The source said that the idea of mass, uncontrolled migration is “not a vision of Brexit that we will undertake”.

However, the EU has made it clear continued access to the single market is dependent on free movement of labour.

Conservative party tensions were also on show as former Brexit minister David Jones branded Mr Hammond’s transition initiative “deeply dangerous” as he accused the chancellor of “going on manoeuvres” while the British prime minister Theresa May was abroad on holiday.

“All this agitation by the chancellor and his allies is hugely discourteous to her and undermines her authority,” Mr Jones said in the Mail On Sunday.

Gerard Lyons, who was an economic adviser to Mr Johnson when he was London mayor, said a two-year transition period would work better.

Writing in the Sunday Telegraph, he said: “Many of the ‘risks’ being highlighted about Brexit are perceived risks, not real risks. And a two-year transition would alleviate many concerns.”

Mr Johnson has not yet commented publicly on Mr Hammond’s transition plans.

He said: “Dr Fox’s comments, directly contradicting the chancellor over a transitional agreement on Brexit, show all the signs of a cabinet in a state of civil war.”