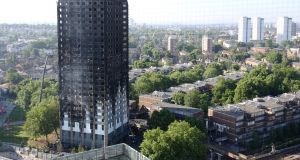 A series of fire safety tests designed to probe cladding systems on high-rise towers across the UK have concluded, finding 228 buildings at risk, the government said.

In the final raft of assessments, ordered in the wake of the Grenfell Tower inferno, a combination of Aluminium Composite Material (ACM) cladding with a limited flammability filling and stone-wool insulation was deemed safe.

No buildings in the UK are known to have this mixture of materials, but the Department for Communities and Local Government (DCLG) said it could act as a solution for structures with dangerous cladding.

It is understood that the last cladding system examined was considered the least dangerous option out of the seven tested.

The so-called “whole system” tests were designed to see how different cladding systems reacted in a fire, before determining if they complied with building regulations.

It is suspected that a combination of flammable ACM panels and combustible insulation accelerated the spread of the June 14th fire, in which at least 80 people died.

Different measures have been put in place at the hundreds of buildings determined to be a fire hazard, which are chiefly owned by councils, housing associations and private landlords.

Those thought to be encased in the most flammable material were advised to remove it, while other building owners were told they should consider reviewing the combination of materials used.

The government-backed assessments followed an initial round of combustibility tests on the cladding samples alone, which were criticised for being too limited.

An independent review of building regulations and fire safety was announced by the government last month.