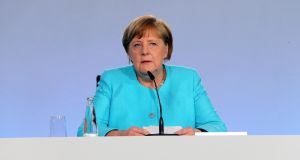 The German government has agreed a €130 billion fiscal stimulus centred on a big cut in value added tax as it scrambles to mitigate the economic damage of the coronavirus pandemic.

From July 1st until the end of 2020, the standard rate of VAT will be reduced from 19 to 16 per cent, and the lower band cut from 7 to 5 per cent – a measure that will cost €20 billion. The government also plans a €300 once-off “children’s bonus” payment for every child in the country.

The aim of the package is to stimulate consumer demand as Germany comes out of the coronavirus-related lockdown and public life gradually returns to normal. Thanks to the pandemic, the country is heading for the worst recession in its postwar history, with gross domestic product set to shrink 6.3 per cent this year, according to officials. But ministers believe that without urgent action to ease the burden on companies and taxpayers, the economic damage could end up being worse.

In announcing the package, Chancellor Angela Merkel said the fact that Germany had seven million temporarily furloughed workers “shows how fragile the situation is, and how we must now succeed in boosting the economy and so safeguarding jobs”.

As well as the VAT cut, the measures include generous financial help to hard-pressed municipalities and expanded incentives for buying electric cars. The measures were announced after 21 hours of negotiations between the partners in Ms Merkel’s governing “grand coalition” – her own Christian Democratic Union; its Bavarian sister party, the CSU; and the left-of-centre Social Democrats.

The package will cost €130 billion in 2020 and 2021, with €120 billion being paid by the federal government and the rest by the country’s regions and municipalities. Finance minister Olaf Scholz said the new stimulus measures would necessitate an extra emergency budget this year, but the additional sums that would have to be raised were “manageable”.

But the car industry will be disappointed that the measures do not include any incentives for the purchase of conventional petrol and diesel cars similar to the “scrappage” scheme that helped get the German auto sector back on its feet after the 2008-2009 financial crisis.

The stimulus comes on top of the massive economic aid package Berlin unveiled at the start of the crisis, which, according to the Bruegel think-tank, is equivalent to 10.1 per cent of its GDP, making it larger than that of any other western country. That package included a €100 billion fund to buy stakes in companies laid low by coronavirus; €50 billion in direct grants to distressed small businesses; and €10 billion for an expanded furloughed worker scheme.

In a statement the coalition partners said that having reduced the number of new infections and gradually lifted the coronavirus shutdown, they now intended to “lead Germany back to a sustainable path of growth, which will secure jobs and prosperity”.

To do this, the government not only had to mitigate the effects of the shutdown, but also modernise the economy, promoting innovation and removing obstacles to growth. “Germany must emerge strengthened [from this crisis],” the statement said.

The stimulus includes a reduction in electricity prices for consumers through a cut in the Renewable Energy Act levy, which is used to subsidise solar and wind energy. There are also generous federal allocations to municipal councils whose tax revenues have been badly hit by the reduction in business activity.

The government also agreed on a €25 billion package of “bridging aid”, limited to the period June-August, for hospitality businesses such as hotels, restaurants, bars and clubs that have been particularly hard hit by coronavirus. In addition, the coalition partners signed off on a €50 billion “future package” including measures to promote investment in research, particularly in areas such as artificial intelligence and quantum computing. – Copyright The Financial Times Limited 2020