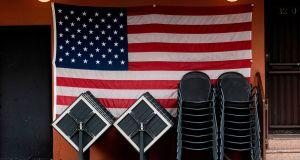 Continuing claims, which counts the number of people receiving unemployment benefits, edged up to 21.5 million for the week ending May 23rd. Photograph: AFP via Getty

Almost 1.9 million Americans filed for unemployment benefits for the first time last week, taking the total number of new claims to nearly 43 million since lockdowns began in mid-March as the US economy struggles to reopen.

Initial jobless claims slowed for the ninth consecutive week to 1.87 million in the week ended May 30th, the US labour department said on Thursday. That marked the first time claims fell below two million in the 11 weeks since the start of the pandemic shutdowns, and compares with economists’ expectations of 1.84 million.

Continuing claims, which counts the number of people actually receiving benefits and is considered a gauge of ongoing unemployment, edged up to 21.5 million for the week ending May 23rd.

The slowing in the pace of jobless claims indicates some Americans are returning to work as states have begun to emerge from Covid-19 shutdowns and reboot activity.

California and Florida were the states with the highest initial claims last week at 230,461 and 206,494 respectively.

The federal Pandemic Unemployment Assistance Program, which has extended aid to the self-employed and others, recorded 623,073 new applications in the week ended May 30th. However, the expanded jobless benefits that were part of the Cares Act are expected to expire in July.

“While the drop in new claims is welcome news and more evidence that the worst of the job losses are behind us, the recovery in the labour market is expected to be painfully slow,” said Gregory Daco, economist at Oxford Economics. “We look for a two-phase recovery, with an initial burst in rehiring followed by a much slower retracement of job losses.”

The pandemic is expected to wipe out a cumulative $15.7 trillion of output from the US economy this decade, the Congressional Budget Office said this week.

Federal Reserve chair Jay Powell has said the US central bank is “strongly committed” to deploying measures to help the economy during the coronavirus pandemic. – Copyright The Financial Times Limited 2020