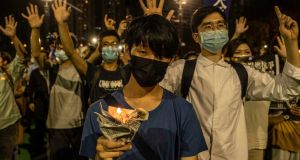 Thousands defied a ban to mark the anniversary of the Tiananmen Square massacre in Hong Kong on Thursday evening, hours after legislators passed a law making it a criminal offence to mock China’s national anthem.

Critics say the law is just the latest in a spate of moves Beijing is taking to tighten its squeeze on the semi-autonomous city.

Under the controversial new law, which was passed on the 31st anniversary of the Tiananmen crackdown, those found guilty of abusing the national anthem face up to three years in prison and fines of up to HK$50,000 (€5,760).

The new law comes shortly after Beijing announced it would impose a far-reaching national security law on Hong Kong and allow its security organs to openly operate in the city for the first time, a move activists say is part of a concentrated effort by China’s Communist Party to further erode the city’s freedoms and quell the pro-democracy movement.

The vote on the national anthem law had to be delayed on Thursday after two pro-democracy lawmakers threw a foul-smelling liquid on the floor of the chamber to commemorate the 1989 bloody crackdown in Beijing, when troops and tanks opened fire on student protesters.

“A murderous state stinks forever. What we did today is to remind the world that we should never forgive the Chinese Communist Party for killing its own people 31 years ago,” said legislator Eddie Chu before he was removed from the chamber.

Tens of thousands of people normally mark the anniversary in Hong Kong with a candlelight vigil in Victoria Park but this year’s gathering was prohibited for the first time in three decades, with the authorities citing public health concerns because of the coronavirus outbreak.

Despite the ban, thousands gathered in the park on Thursday evening and lit candles, chanted pro-democracy slogans and sang songs linked to the 1989 movement. In addition to the gathering in Victoria Park, several other vigils popped up in different districts across the city.

“Around the world, there are 365 days in a year. Yet in China, one of those days is purposely forgotten each year,” Taiwan’s President Tsai Ing-wen posted on social media.

He also hit back at Boris Johnson after the British prime minister pledged to change the UK immigration rules to offer up to three million people from Hong Kong a “route to citizenship” if Beijing imposes the contentious national security law.

“This would amount to one of the biggest changes in our visa system in British history. If it proves necessary, the British government will take this step and take it willingly,” Mr Johnson said.

The Chinese spokesman told the UK to “pull back before it is too late” and urged London to “abandon its cold war and colonialist mentality, and understand and respect the fact that Hong Kong has returned to Chinese rule”.

1 Rare whale dies after getting into distress in Wicklow Harbour
2 Coronavirus claims one more life and 11 new cases reported in Republic
3 Bobby Storey: The IRA's planner and enforcer who stayed in the shadows
4 Covid-19: Travel restrictions to stay and 'green list' put on hold amid fears of second wave
5 Taoiseach ‘disappointed’ he only learned of Barry Cowen’s driving ban on Friday
Real news has value SUBSCRIBE