Trump administration has presented China with ‘opportunities’ on the world stage 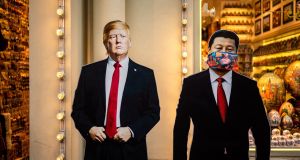 With race riots raging across the US and the country’s coronavirus toll continuing to soar, China is gleefully leading a chorus of disapproval at US president Donald Trump and his handling of the recent crises.

To Beijing the chaos in Washington is a most welcome distraction from issues closer to home, and the Trump presidency is increasingly being held up in state media as a prime exhibit of a flawed western political system.

Where Trump’s failings have been highlighted, the government press has gone into overdrive of late to contrast them with the successes of Beijing’s one-party system and “the inherent political advantages of China’s socialist system”.

Mike Chinoy, a former CNN China correspondent and now a fellow with the University of Southern California’s US-China Institute, said Beijing must be thanking its lucky stars for Trump.

“My sense is that China must see Trump as the gift that keeps on giving. Despite his harsh rhetoric and occasionally tough gestures, Trump has played into Beijing’s hands in so many ways,” he told The Irish Times.

Thursday is the 31st anniversary of the Tiananmen Square massacre, when Beijing’s leaders sent in tanks and troops to crush hundreds of unarmed students, but there has been no mention of that in Chinese media outlets this week. Instead there has been comprehensive and graphic coverage of the protests and subsequent crackdowns across US cities.

“Why did Washington arrogantly and unreasonably accuse other countries of quelling riots?” the Global Times asked in an editorial, referring to the US criticism of China’s handling of the Hong Kong pro-democracy protests.

Trump and his officials “overbearingly portray” the US as the beacon of democracy and human rights, the article said. “Have they really not anticipated that the US could one day confront the situation as it does today, and that their previous big talk could become a slap on their face?”

There is a notable sense of relief among Chinese officials and state media these days with the focus of negative international attention shifting to Washington, given the thin ice Beijing found itself on a few months ago when it emerged it had concealed the extent and the contagiousness of the coronavirus outbreak.

The Trump administration’s failure to contain the Covid-19 epidemic showed “the US is falling into disgrace”, the Global Times said, adding that the outbreak had “exposed severe deficiencies in the country’s governance”.

In response to Trump’s criticism of China over the outbreak, government spokesman Zhao Lijian said this week that given the US death toll was more than 22 times that of China’s, “the statistics can prove who is incompetent and inadequate”.

When Trump announced the US would be withdrawing from the World Health Organisation, Zhao said Washington had become “addicted to quitting”.

The editor of the Global Times, Hu Xijin, said the US system used to be appealing to many Chinese people “but through the pandemic Chinese saw US government’s incompetence ... disregard for life and its overt lies. Washington’s political halo has little left.”

Chinoy said Trump’s “appalling” handling of the Covid outbreak and the race riots had further eroded US standing around the world.

“And by accelerating political chaos and tension in the States made the US much weaker and even less able to counter China’s increasingly assertive moves around the world.”

Stirring up patriotic and nationalistic sentiment, People’s Daily suggested the international community was increasingly noting the benefits of China’s political system compared to Trump’s United States, where injustice and inequality was rampant.

China’s efforts to alleviate domestic poverty would be “just unthinkable in the US”, the paper said, “where the frosty attitude of capitalism against the vulnerable groups has been laid bare”.

Robert Kapp, an independent consultant and former president of the US-China Business Council, said the Trump administration had presented China with opportunities on the world stage.

“As Washington swings its machete in many directions, China will see chances to look good by comparison. Whether the Chinese will maximise those opportunities, however, remains to be seen,” he told The Irish Times.

He said the US currently seemed little concerned with upholding long-standing American strengths, other than military power, in the world community. “That is potentially of huge benefit to China’s ambitions if China can deploy its own resources in sophisticated ways.”

Chinoy said the presidency of Trump had so weakened the US and the US-based liberal international order that Beijing “must be thrilled to see what a mess Trump has made, and must devoutly be hoping he will be re-elected and thus continue to preside over America’s catastrophic decline”.

Referencing elections, People’s Daily said the series of debacles under the Trump administration showed how the upcoming presidential vote in the US would ultimately be meaningless to ordinary Americans. “As elections come and go, it is simply about one group of elites replacing the other,” it said.

Overall, Trump’s actions domestically and on the world stage were making the US “thinner and weaker”, Xu said.

The US was a superpower that was killing itself over time, he said.