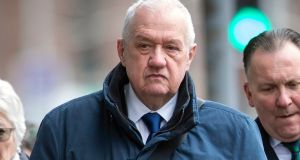 The former South Yorkshire police chief superintendent who was in command of the 1989 FA Cup semi-final at Hillsborough, where 96 people were killed, will face a retrial on a charge of gross negligence manslaughter, a judge has ruled.

Sir Peter Openshaw, who presided over the 10-week trial of Mr Duckenfield earlier this year in which the jury failed to reach a verdict, handed down his ruling on Tuesday after the Crown Prosecution Service (CPS) applied for a retrial. The new hearing will be at Preston crown court on October 7th.

Benjamin Myers QC, who conducted Mr Duckenfield’s defence at the trial, had opposed the application. The jury that heard evidence in the prosecution at Preston crown court between January 14th and March 25th returned on their eighth day of deliberations on April 3rd to say they had been unable to reach a verdict by the required majority of 10-2.

Mr Duckenfield was charged with gross negligence manslaughter in relation to 95 of the 96 people who died at the match between Liverpool and Nottingham Forest at Sheffield Wednesday’s Hillsborough stadium on April 15th, 1989.

Richard Matthews QC, the lead barrister for the CPS, told Sir Peter on the same day the jury failed to reach its verdict that the service intended to seek a retrial.

The jury did return a 10-2 majority guilty verdict against the other defendant, Graham Mackrell, the Sheffield Wednesday secretary and safety officer for the Hillsborough ground at the time of the disaster, on a charge of breaching his legal duty to keep people safe at his place of work.

The 96 victims, aged between 10 and 67, were killed at the match in a crush in the central “pens”, 3 and 4, of the Leppings Lane terrace. No charge was brought against Mr Duckenfield in relation to the 96th person to die, Tony Bland, who was critically injured in the crush and was maintained on life support in hospital until 1993, when support was lawfully withdrawn.

According to the law in 1989, a criminal charge relating to a death could not be brought if the victim died more than a year and a day after the acts that allegedly caused it. – Guardian