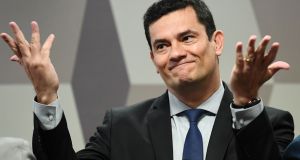 Brazil’s historic Car Wash investigation faces its first major judicial test on Tuesday, since leaks called into question the impartiality of the investigation into political corruption.

The defence team of imprisoned former president Luiz Inácio Lula da Silva is due to seek his release before a supreme court panel by arguing that Sérgio Moro, the judge who convicted him in 2017, was biased against him.

Lula was sentenced to nine years in jail by Moro for his part in the sprawling corruption scandal that centred on Brazil’s state-owned oil giant Petrobras, a conviction that barred him from running in last year’s presidential election.

The petition to remove from the case Moro, who is now justice minister in the cabinet of far right president Jair Bolsonaro, and to grant Lula habeas corpus was originally filed last year. But his lawyers recently reinforced their petition by appending leaked conversations between Moro and Deltan Dallagnol, the federal prosecutor in his trial.

The leaks first started appearing two weeks ago on The Intercept website, and have raised questions about whether Moro overstepped his constitutional limits as a judge to direct and shape the progress of the corruption cases being built by federal prosecutors against politicians and businessmen.

In doing so, the revelations have raised questions about Moro’s impartiality, especially in relation to Lula’s trial. They have provoked deep disquiet in Brazil’s judicial sphere and there have been calls for Moro and Dallagnol to step aside while the leaks are investigated. The revelations have been seized on by Lula’s defence and his Workers Party as proof of their claim that Brazil’s first working-class president was the victim of a judicial witch-hunt.

But Lula’s hopes that the controversy will lead to a quick release from prison could yet stall on a concerted fightback by the Car Wash operation’s leading figures and its supporters. They have employed a two-pronged strategy to prevent the unravelling of hundreds of cases they have built since 2014 against some of the most powerful political and business figures in Latin America’s biggest country.

While denying that the leaks prove any inappropriate behaviour between a judge and prosecution, Moro and Dallagnol have also sought to delegitimise the revelations in The Intercept by highlighting the fact they are the fruits of a hacking operation that illegally obtained the contents of a messaging app used by Dallagnol.

“This is clearly a criminal attempt to delegitimise Car Wash, which was a huge advance for Brazilian society,” says jurist Modesto Carvalhosa, an anti-corruption expert and prominent supporter of the operation since its inception.

Although the leaks have so far shown glimpses of how Moro and Dallagnol worked together to defend the investigation from attempts to undermine it, nothing has been published yet that calls into question evidence used to convict Lula and dozens of other politicians and businessmen.

Defending the work of Moro and the taskforce of prosecutors working under Dallagnol, supporters also point to the fact that the convictions handed out by Moro have in many cases been confirmed by higher courts.

In a nine-hour appearance before the Senate’s judiciary committee last week, Moro told senators “if there have been any irregularities I will quit”. But he also challenged his critics on the committee by demanding to know if they wanted to annul the whole of Car Wash.

As well as Lula, an annulment could lead to dozens of politicians leaving jail along with businessmen who confessed to irregularities, and to the return of about three million reais (€700 million) in recovered money, a move that could spark widespread popular anger.

“In ‘Brasil Profonde’ people just want politicians punished. They are indignant with corruption and many do not care if Moro bent the rules ethically speaking,” says political analyst Gaudêncio Torquato.

There is little sign of the public support for Car Wash suffering much damage from the leaks, which explains why Moro received a relatively easy ride last week in Congress, where he has many enemies because of what politicians view as his crusade against them.

Such pressures will also be felt by the supreme court panel due to hear Lula’s petition on Tuesday. The court has been deeply divided in its approach to Car Wash, with some justices protecting the investigation and Moro while others have heavily criticised what they see as its excesses.

This has led many to suspect Lula’s bid for freedom could fall foul of the court’s own divisions and the ongoing public support for Car Wash.

“I think the supreme court will do what it usually does when faced with a difficult decision and just kick the can down the road,” says Torquato.

Already on Monday afternoon it appeared the court was moving to do exactly that, forcing Lula’s defence to file another petition demanding his case be heard as scheduled on Tuesday.

It was not immediately clear when the supreme court would consider this new petition.