Party’s 438,000 members will be asked to choose a new leader after another series of up to 30 regional conferences 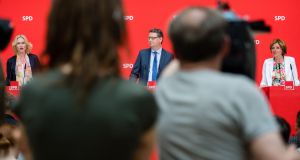 Three weeks after losing its leader, and with a conspicuous lack of jostling among would-be successors, Germany’s ailing Social Democratic Party (SPD) is throwing open its doors to leadership duos, chosen in a grassroots election.

Some 18 months ago, an exhaustive regional roadshow saw party rank-and-file back a third grand coalition under Angela Merkel. Now those same 438,000 members will be asked to choose a new leader or leaders after another series of up to 30 regional conferences.

Nominations run until September 1st and a result is expected by October 26th. Any winner will be installed by a December party conference, suggesting the junior partner in Germany’s grand coalition will be preoccupied with itself until year-end.

With Merkel’s own Christian Democrat (CDU/CSU) alliance facing internal political struggles of its own, Germany’s EU neighbours head off for the summer unsure whether Berlin’s grand coalition will limp on until 2022 or collapse early.

And a year before Germany takes over the rotating EU presidency, the SPD is undecided over whether clinging to – or rejecting – power is the best way to reverse the party’s steady decline since entering its first grand coalition in 2005.

Then the SPD chair described his job leading the centre-left party as the “best job next to being pope”. But a lot has happened in the 14 years since then – three grand coalitions, six leaders and 20 percentage points. Germany’s oldest party, with more than 150 years under its belt, is now sliding towards single digits with 12 per cent in polls – joint third alongside the far-right Alternative für Deutschland (AfD).

Unfazed by the prospect of further election humiliation in autumn regional polls, some party grandees who had taken themselves out of the race indicated they might be attracted back by the dual-leader option. As one put it on Monday, with delicate understatement: the party “needs a lot of strength”.

Manuela Schwesig, an eastern state leader and interim co-leader, tried to drum up enthusiasm by insisting the SPD was the “oldest, proudest party with an unbelievable history . . . not something you get at a surplus store”. With that she – unintentionally – hit on what for some is its existential problem: being surplus to requirements.

Its original working class voters have either risen up the social ladder and gone elsewhere or, frustrated by the SPD’s centrist-liberal policies, departed to fringe left- or right-wing alternatives. The SPD’s new leader or leaders will have their work cut out trying to please everyone in their dispirited party.

One camp inside the party is anxious to cling to power and the other determined to rebuild in opposition. Beyond that are rank-and-file members. SPD secretary Lars Klingbeil said on Monday he had received in three weeks from them no less than 23,200 ideas on how to fix the party.

“I am sure,” he predicted, “the SPD has a very exciting time ahead of it.”

1 Coronavirus: More ‘striking’ evidence BCG vaccine might protect against Covid-19
2 Boris Johnson remains in intensive care being treated for coronavirus
3 Coronavirus: Why are men twice as likely to die as women?
4 Coronavirus: Ireland can expect 400 deaths by August
5 Donald Trump’s clown car administration has put the fear in all of us
Real news has value SUBSCRIBE