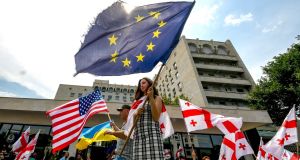 Protesters wave EU, Georgian and US flags during a protest in Tbilisi against its government and Kremlin influence in the Black Sea state. Photograph: Getty Images

Moscow has accused the West of fanning anti-Russian feeling in Georgia, as ties between the ex-Soviet neighbours fray amid protests in the Black Sea state against its government and Kremlin influence.

Demonstrations continued on Monday in the Georgian capital, Tbilisi, to call for snap parliamentary elections, the dismissal of interior minister Giorgi Gakharia and the release of all those detained in violent clashes with riot police last week.

More than 240 protesters and police officers were hurt last Thursday night, when some 10,000 people rallied in Tbilisi after a Russian deputy sat in the speaker’s chair in the Georgian parliament during an international forum of politicians.

Police used tear gas and rubber bullets to stop the crowd storming parliament, which demonstrators said was no place for a representative of Russia. Moscow’s forces crushed Georgia in a brief 2008 war and thousands of Russian troops are now based in two regions of the country that are run by Kremlin-backed separatists.

Russian foreign minister Sergei Lavrov on Monday described the unrest in Georgia as a consequence of “geopolitical engineering by our western colleagues”.

“Western ‘supervisors’ are ready to close their eyes to the excesses of ultra-nationalists and to Russophobia, just to rip up all ties between the people of Georgia and our country, to rewrite our common history,” he alleged.

Georgia swept out the Soviet-era old guard in the 2003 Rose Revolution and quickly became a staunch western ally and thorn in Russia’s side by training with US and other Nato troops and aiming for eventual membership of the military alliance.

The Kremlin’s response has included punishing economic measures against Tbilisi, and in recent days Russia announced that for security reasons it would stop its airlines flying to Georgia and ban Georgian carriers from flying to Russia.

On Monday, officials in Moscow said they were also tightening control over Georgian wine imports to Russia due to safety concerns; tourism and winemaking are key sectors of the economy for the country of 3.7 million people.

Kremlin spokesman Dmitry Peskov said the flight ban, which is due to start on July 8th, could be reconsidered once “the situation in Georgia returns to a non-Russophobic course”.

“Now, on the contrary, the situation is getting more serious,” he added.

Well over one million Russian tourists visited Georgia last year, drawn by the beauty of Tbilisi, the Caucasus mountains and the Black Sea coast and the country’s food, wine and hospitality.

“Against the background of the protest rallies that have been taking place in Tbilisi over the past few days . . . foreign visitors, journalists and tourists, including those from the Russian Federation have faced no threat,” Georgia’s foreign ministry insisted.

The ruling Georgian Dream party – which critics say is too soft on Russia – made a concession to critics on Monday by bringing forward planned election reform that could end its domination of parliament.

Demonstrations later resumed, however, to demand early elections, the release of more than 100 detained protesters and the sacking of Mr Gakharia due to alleged police violence during last Thursday’s rally.