A man who pushed a former Eurotunnel chairman onto the tracks of the London Underground has been found guilty of attempted murder. Video: British Transport Police 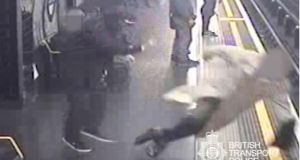 A man with paranoid schizophrenia who pushed a former Eurotunnel chairman on to London Underground tracks has been jailed for life.

The defendant, who also attacked another Tube traveller, Tobias French, earlier that day, was found guilty of two counts of attempted murder.

He was sentenced at the Old Bailey to a minimum of 12 years in custody before he can be released on parole. He will initially serve his sentence in hospital until he is deemed suitable for prison.

Judge Nicholas Hilliard QC said the attacks were carried out in “terrifying circumstances” and told Crossley he poses a “grave and enduring risk to the public”.

“You pushed Mr French first of all knowing very clearly that was wrong, and then you tried to make yourself harder to identify with your hood,” he said.

Crossley then “consciously and deliberately sought out a more vulnerable victim”, the judge said, adding Sir Robert was singled out for his age.

“The moment you saw Sir Robert you went for him,” he said.

“I’m satisfied that paranoid schizophrenia was not the driving force here – it was drug abuse and its consequences.”

The judge added: “It’s an aggravating feature that you attacked Sir Robert because of his age.”

Sir Robert had been heading to Oxford Circus after a pensioners’ lunch when he was targeted by Crossley.

He was rescued by teacher Riyad El Hussani, who leapt from the platform just one minute before the next train was due to arrive.

The judge said Mr Hussani acted with “great bravery and no regard at all for his safety”.

The industrialist, who was knighted in 1998, suffered a broken pelvis and a cut to the head which needed 12 stitches.

Crossley was chased and detained by members of the public.

The shocking incident was caught on CCTV footage, which was played at Crossley’s trial last year.

Earlier, professional sportsman Mr French managed to keep his balance when he was pushed by Crossley as a train pulled in to Tottenham Court Road station.

Mr Hilliard said film of the attack on Mr French was “terrifying to watch”.

At his trial, Crossley, of Leyton, east London, had said he picked his victims at random and did not mean to kill them.

He told jurors he had taken crack cocaine the previous day and began feeling paranoid as he made his way to the West End to get coffee.

Crossley was sentenced to life with a minimum of 12 years for each count of attempted murder, to run concurrently.

The judge added: “In my judgment your culpability for these offences remains high such that punishment is necessary and a hospital would not be suitable.”

Before being sentenced, Crossley also admitted being in breach of a 10-month suspended jail sentence imposed at Snaresbrook Crown Court in January 2018.

He had avoided jail after being convicted of a sexual assault on a community nurse, racially aggravated harassment of a care worker and possession of a knife in public. – PA