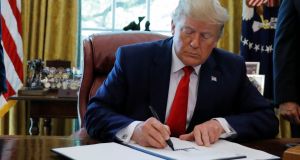 US president Donald Trump signs an executive order imposing fresh sanctions on Iran in the Oval Office of the White House in Washington. Photograph: Carlos Barria/Reuters

Eight senior figures, including those deemed to be responsible for last week’s shooting-down of a US drone according to the United States, were targeted in what Mr Trump described as “hard-hitting” sanctions. Foreign minister Javad Zarif, a senior figure in the administration who played a crucial role in the negotiations between Tehran and other international powers in the run-up to the 2015 nuclear deal, will also face sanctions in the coming days.

Signing the executive order outlining the sanctions, Mr Trump said that the Supreme Leader Ayatollah Khamenei “ultimately is responsible for the hostile conduct of the regime”.

Defending the move as a “strong and proportionate response to Iran’s increasingly provocative actions,” Mr Trump said that the measures will “deny the Supreme Leader and the Supreme Leader’s office and those closely affiliated with him and the office access to key financial resources”.

He also hinted that the US could respond more combatively to Iran in the future. “I think a lot of restraint has been shown by us but that doesn’t mean we’re going to show it in the future,” he said.

Announcing details of the sanctions, Treasury Secretary Steve Mnuchin said the aim was to “go after the Supreme Leader’s office and to lock up literally billions of dollars more of assets”.

He also confirmed that he had not consulted allies on the latest sanction decisions. Responding on Twitter, Mr Zarif accused Mr Trump’s team of despising diplomacy and of having a “thirst for war”.

The Trump administration’s move on Monday to increase pressure on Iran is the latest effort to squeeze Iran economically.

Last month the administration dropped a waiver that would have allowed third parties to buy Iranian oil, a policy that has severely impacted the Iranian economy. Several companies controlled by the government are already under sanctions.

Iran’s economy has been crippled by the US decision to withdraw from the 2015 nuclear deal last year. That agreement curbed Iran’s nuclear activity in exchange for the lifting of sanctions.

The announcement in Washington took place as Secretary of State Mike Pompeo met with leaders of Saudi Arabia, a key US ally in the region. Among those he met with were Crown Prince Mohammed bin Salman.

Monday’s announcement comes days after the US president called off a planned military strike on Iran in reprisal for a shooting-down of a US drone in the region last week.

The Pentagon has dismissed Iranian claims that the aircraft was operating in Iranian air space.

The incident marked a significant escalation in tensions between the two powers which has been building since the US pulled out of the Iran nuclear deal in May 2018.

The White House blamed Iran for an attack on two oil ships this month in the region, releasing video footage of what it claimed was an Iranian Revolutionary Guards boat pulling up beside a stricken oil tanker and removing an unexploded mine.

In response, Iran announced a week ago that it would increase its stockpile of uranium in breach of the 2015 Iran nuclear deal and hinted that it could increase enrichment levels to 20 per cent, a move that would bring it closer to having the capability to create a nuclear bomb.