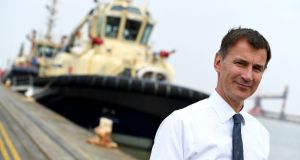 Sky News has cancelled a Conservative leadership debate scheduled for Tuesday evening after Boris Johnson refused to face his rival Jeremy Hunt. Mr Hunt accused Mr Johnson, who has taken part in only one debate and given one broadcast interview and one newspaper interview, of dodging scrutiny.

“Frankly, the Conservative Party will start to feel cheated of having a proper leadership campaign if the frontrunner isn’t prepared to subject himself to the scrutiny of TV debates,” he said.

“There’s only two weeks now before postal ballots arrive, and we owe the Conservative party, we owe the country, a proper contest.”

Mr Johnson remains under pressure to explain why police were called early on Friday morning to a south London flat he shares with Carrie Symonds. The former foreign secretary’s allies have targeted the neighbours who alerted the police after they heard Ms Symonds screaming and shouting “get off me” and “get out of my flat”.

Jacob Rees-Mogg described the couple as “Corbynista curtain twitchers” and “hypocritical lefties”. But a number of domestic violence charities issued a joint statement urging people to take action if they are worried about a neighbour’s safety.

“It’s not for us to judge what happens in anyone’s relationship, but it is for us all to take action if we are concerned about someone’s safety. That’s a natural human instinct. Let’s support it rather than challenge it. Don’t walk on by if you are worried. Ask if they are okay. Tell someone. Call the police,” they said.

Labour MP Jess Phillips, who managed women’s refuges before entering parliament, said she was shocked and appalled to hear MPs describing the incident involving Mr Johnson and Ms Symonds as a private matter.

The Evening Standard on Monday published on its front page a photograph of Mr Johnson and Ms Symonds apparently enjoying a romantic moment in a garden. Nimko Ali, a close friend of Ms Symonds, told the Telegraph that the couple were in love and planning to marry.

Mr Johnson, who remains the frontrunner to succeed Theresa May as prime minister, has promised to take Britain out of the EU by October 31st, with or without a deal. But former chancellor Ken Clarke said on Monday that he was prepared to bring down a Conservative government in a vote of no confidence rather than permit a no-deal Brexit.

“It depends on the circumstances at the time and what whoever is prime minister is putting forward as the policy he is going to pursue,” he said.

“But I am not going to vote in favour of a government that says it is going to pursue policies which are totally incompatible with everything the Conservative party has stood for under all those prime ministers for the decades that I have been in parliament.”