Despite its ‘mistakes, lapses, and occasional acts of cowardice’, Europe remains ‘the second home of every free man and woman’ 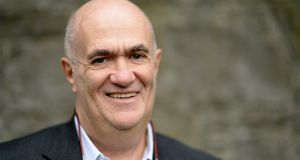 The author Colm Tóibín is among a group of 30 writers, historians and Nobel laureates who declared in a manifesto published in several newspapers that Europe as an idea was “coming apart before our eyes”. File Photograph: Dara Mac Donaill/The Irish Times

Liberal values in Europe face a challenge “not seen since the 1930s”, leading intellectuals from 21 countries have said, as the UK lurches towards Brexit and nationalists look set to make sweeping gains in EU parliamentary elections.

The group of 30 writers, historians and Nobel laureates declared in a manifesto published in several newspapers, including the Guardian, that Europe as an idea was “coming apart before our eyes”.

“We must now will Europe or perish beneath the waves of populism,” the document reads. “We must rediscover political voluntarism or accept that resentment, hatred, and their cortege of sad passions will surround and submerge us.”

They write of their regret that Europe has been “abandoned from across the Channel” - an oblique reference to the drawn-out Brexit process that has arguably brought Anglo-European relations to their lowest point since the second world war.

And they say that unless efforts are made to combat a rising tide of populism, the EU elections will be “the most calamitous that we have ever known: victory for the wreckers; disgrace for those who still believe in the legacy of Erasmus, Dante, Goethe, and Comenius; disdain for intelligence and culture; explosions of xenophobia and anti-semitism; disaster”.

“Abandoned from across the Channel and from across the Atlantic by the two great allies who in the previous century saved it twice from suicide; vulnerable to the increasingly overt manipulations of the master of the Kremlin, Europe as an idea, as will and representation, is coming apart before our eyes,” the text reads.

Rushdie told The Guardian: “Europe is in greater danger now than at any time in the last 70 years, and if one believes in that idea it’s time to stand up and be counted.

“In the UK, I hope parliament may yet have the courage to call for a second referendum. That could rescue the country from the calamity of Brexit and go a long way towards rescuing the EU as well.”

McEwan said he had signed the manifesto because he was “very pessimistic” about the current moment, “but try to be hopeful that the zeitgeist will turn”.

“The historical success of Europe made it easier to defend these ideas and values which are crucial to humanity all over the world,” he said. “There is no Europe besides these values except the Europe of tourism and business. Europe is not a geography first but these ideas. This idea of Europe is under attack.”

In the EU elections in May - the first that will not include Britain - most observers predict a rise in support for populist, nationalist or anti-immigration parties. Many of them have made significant gains in national elections, as the centre-right and centre-left that have traditionally dominated Europe’s postwar politics retreat.

While they did not make any practical calls to action, the manifesto’s signatories said they “refuse to resign themselves to this looming catastrophe”. They counted themselves among the “too quiet” European patriots who understand that “three-quarters of a century after the defeat of fascism and 30 years after the fall of the Berlin wall, a new battle for civilisation is under way”.

Despite its “mistakes, lapses, and occasional acts of cowardice”, Europe remains “the second home of every free man and woman on the planet”, they say, noting with regret the widely held but mistaken belief of their generation that “the continent would come together on its own, without our labour”.

Pro-Europeans “no longer have a choice”, they say. “We must sound the alarm against the arsonists of soul and spirit that, from Paris to Rome, with stops in Barcelona, Budapest, Dresden, Vienna, or Warsaw, are playing with the fire of our freedoms.”