Macron under pressure from human rights groups over Egypt trip 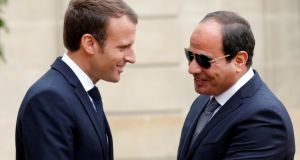 French president Emmanuel Macron will travel to Egypt on Sunday for a three-day visit that raises a thorny foreign policy question.

Can a leader who professes to represent progressive forces in Europe compromise himself and his country by maintaining close relations with a dictator who represses his own people?

“I believe in the sovereignty of states. So in the same way that I do not accept other leaders giving me lessons on how to govern my country, I don’t lecture others,” Macron said when asked about massive human rights abuses in Egypt.

And although France is not prepared to profoundly alter its friendship with the country of 100 million, there are signs of an inflection in Macron’s rhetoric, if not his policy.

“The unprecedented repression of civil society in Egypt has intensified,” says Katia Roux, advocacy officer at the French chapter of Amnesty International. Roux was one of eight human rights defenders who met Macron’s top Middle-East advisers at the Élysée this week, to brief them on what Roux calls “the serious deterioration of the human rights situation since Sisi’s visit”.

“Egyptian authorities have adopted a zero-tolerance policy towards any free and independent voices who are perceived to criticise the government. Sisi’s government has been intractable in hunting down all potential rivals.”

The French branch of the Irish group Frontline Defenders published a report on January 14th detailing the persecution of Egyptian labour activists. In particular, 26 civilian labourers at the Alexandria shipyard, where the French company Naval Group is carrying out a €1 billion contract, have been subjected to military trials.

On January 23rd, Reporters Without Borders published portraits of 10 of the 32 journalists imprisoned by Sisi’s regime. Their offences include writing about run-away inflation, anti-terrorist operations and the corruption of senior officials.

Macron’s advisers promise France will be more vigilant in future

The repression “touches every milieu, every level of society”, Roux says. “Last May, 35 people were arrested for protesting peacefully against a hike in fuel costs. They were accused of holding an unauthorised demonstration, and of belonging to a terrorist group.”

The government uses the accusation of “belonging to a terrorist group” arbitrarily and to an unprecedented extent, Roux says. “Prosecutors are instructed to detain anyone who criticises the government . . . 500 websites have been blocked . . . Human rights defenders are prosecuted as ‘internal enemies’ if they are receiving funding from abroad. Civil society has been locked down, muzzled. The reality is that Egypt violates human rights in total impunity. Egyptian society is suffocating.”

Only this month, an Egyptian television presenter was sentenced to a year in prison because he interviewed a homosexual on his programme, despite having said he opposed homosexuality.

Meanwhile, the Egyptian prime minister Mostafa Madbouly announced that Sisi has ordered that all owners of red-brick buildings paint them in a single colour by specific deadlines or face prosecution. Unpainted red-brick facades are “uncivilised”, Madbouly said.

In an ornate briefing room at the Élysée Palace, advisers to Macron emphasised the “unavoidable” necessity of maintaining good relations with Cairo.

Because of Egypt’s size, history and geography, it plays an important role in civil wars in Libya and Syria, and in the Gaza Strip. It is also crucial in fighting terrorism and illegal immigration.

The human rights groups supplied the Élysée with a list of 30 journalists, lawyers and human rights defenders whose cases they want Macron to raise with Sisi. Human rights abuses “will be raised, including publicly by the president of the republic” in Cairo, one of Macron’s advisers promised.

We will not know until a joint press conference in Sisi’s palace on Monday how forcefully Macron will make his point, but the commitment is a change from Macron’s tart refusal to “lecture” Sisi in 2017.

The Élysée “has been giving us the argument about silent diplomacy for too long”, says Roux. “There’s a consensus that it didn’t work. We’re asking for strong, public denunciation.”

Human rights groups are also asking that France stall arms sales to Egypt. French armoured vehicles were “hijacked” from the army to the police, who used them for suppressing demonstrations.

Now Egypt wants to buy armed drones and other surveillance equipment which could be used against domestic opposition. Macron’s advisers promise France will be more vigilant in future.

“France cannot continue to sell weapons to Egypt, to make itself an accomplice of repression, while claiming that it’s addressing human rights,” Roux concludes.