Coveney says: ‘We are as ready as we can be legislatively for March 29th’ 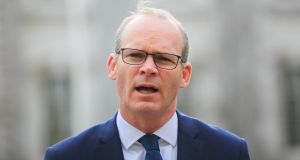 Tánaiste and Minister for Foreign Affairs and Trade Simon Coveney said the legislation was not about empowering Ministers to introduce new legislation, but about protecting existing legislation. Photograph: Gareth Chaney/Collins

Emergency legislation to protect Ireland’s interests in the event of a no-deal Brexit last night completed its passage through the Oireachtas and now goes to the President for signature.

The 98-section Brexit Omnibus Bill is one of the largest and most wide-ranging pieces of legislation in the history of the State, amending 37 prices of primary legislation and affecting the remit of nine Government departments.

After the House of Commons voted on Wednesday night against exiting the EU without a deal, the Withdrawal of the United Kingdom from the European Union (Consequential Provisions) Bill provides protection should there be a no-deal crash out.

The Seanad passed the Bill without a vote on Wednesday following its completion last week in the Dáil.

Tánaiste Simon Coveney said the legislation was needed “to ensure we protect our own people and the country for what will be enormous challenges”.

He said “we are as ready as we can be legislatively for March 29th which is still the possible date” for the UK’s exit from the EU.

Mr Coveney added that “we have done as much as we can to protect people and their rights” with the Bill but there were “many other areas were we continue to work” including contingency planning with the EU and in some areas on a bilateral basis with the UK.

He also said they had to work to protect the “fragile” north-south relationship.

Sinn Féin Senator Máire Devine said a great deal of work had been done but “from here on in we need to plan for ourselves”.

She said that a border poll for Irish unity needed to be “top, front and centre” now and that “it will be three years at least before we have a poll if we call it today”.

He said that when Ireland was looking for Home Rule under Charles Stewart Parnell “certain high Tories said the Irish weren’t fit to govern themselves.

“I think events in this parliament compared to our compatriots across the water would give the lie to that.”

Labour Seanad leader Ivana Bacik highlighted her party’s concern “that in some respects the Bill may go a little too far in providing Ministers with power to effectively make primary legislation”.

Independent Senator Colette Kelleher who described the Bill as “an extraordinary piece of emergency legislation” introduced an amendment providing that within 12 months of enactment the Minister for Foreign Affairs would review the Act as a whole and each Minister would review their own area and that this would be on a statutory basis.

Ms Kelleher acknowledged that Government needed to be able to react decisively in the event of a chaotic no deal exit and that statutory flexibility was required.

But she said the legislation gives Ministers wide-ranging powers to issue regulations and statutory orders and “we need to ensure this is working as intended and that Ministers are using their powers appropriately”.

She said the scrutiny had to be as detailed as the pre-legislative scrutiny conducted by each relevant Oireachtas committee and should be done on a sector by sector and department by department basis on a statutory footing.

“It is a reasonable request. It is a fair and proportionate response to the extraordinary nature of this emergency legislation,” Ms Kelleher said.

Mr Coveney said he supported the purpose of the amendment but said the legislation was not about empowering Ministers to introduce new legislation in new areas. “It’s about protecting existing legislation.”

He added: “It’s about giving the Minister power to maintain the existing level of services”, and he said the Attorney General had given advice “and we are comfortable legally about it”.

Mr Coveney said there would be a review mechanism and the foreign affairs committee would scrutinise the operation of the legislation. A report would be provided reviewing the functioning of the Act and it would be laid in the Oireachtas library.

1 Six counties free of new cases of Covid-19 over past week
2 Gardaí disperse crowds gathered at coastal beauty spots
3 George Floyd death: sweeping protests see curfews in 22 US states
4 How lockdown has helped us to save money - and find new ways to spend it
5 Cabinet to decide on Friday if travel curbs can be lifted early
Real news has value SUBSCRIBE