Cabinet told of British move to exit the backstop 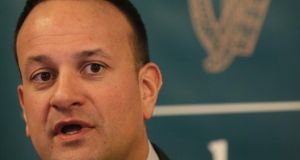 The idea of Britain making a unilateral statement that it believed it could decide on its own to leave the backstop, the insurance policy to avoid a hard border, was discussed by the Cabinet earlier this week.

However, sources at the meeting on Monday night said it was introduced by Taoiseach Leo Varadkar as something the UK government was seeking but had been rejected by the European Union. It was also dismissed by all the Ministers present.

The package of assurances on the Brexit deal that was published late on Monday night, and rejected by the House of Commons on Tuesday, had three elements.

These included a joint interpretative instrument between the EU and UK on the withdrawal agreement, which contains the backstop and was agreed last December; and a joint statement on the accompanying joint political declaration, the looser document on the post Brexit relationship between the EU and UK. The third element was a unilateral declaration by the UK on the backstop.

Numerous sources who attended the meeting on Monday said Mr Varadkar briefed that Britain wanted its own unilateral declaration to include a passage which would spell out its belief it could leave the backstop of its own accord.

The withdrawal agreement says the backstop – which keeps the UK in a customs union with the EU to keep the Border open – would apply “unless and until” a new arrangement to avoid a hard border is agreed.

However, there are arbitration mechanisms to solve rows in relation to the backstop. Mr Varadkar is said to have told the Cabinet the UK wanted to say in its unilateral declaration it could leave the backstop if it felt the arbitration efforts had failed and if it believed the provisions of the backstop risked becoming permanent. Accounts differed among some on what exactly the Taoiseach said and the precise sequence of events.

“What was being proposed was that they would decide to exit it and that was it,” said one source present at the meeting, while another said: “It’d effectively allow them escape the backstop if it was no longer temporary.”

The final wording of the unilateral declaration was being discussed between British prime minister Theresa May and European Commission president Jean Claude Juncker at a meeting in Strasbourg around the same time the Cabinet met.

Sources said Mr Varadkar adjourned the Cabinet meeting at one stage to take a call from Mr Juncker and be briefed on the final wording of the unilateral declaration, relay the position of the Government and then brief the Cabinet again.

One Minister said the UK’s proposal had already been rejected by the EU when raised by the Taoiseach, saying: “It was no longer on the table.”

“There was a real quietness in the room,” the Minister added. “There was a fear because we didn’t know what was being discussed [in Strasbourg]. There has been tremendous solidarity but there is that little man in the back of your head thinking: ‘We are very close now’.”

Another said Mr Varadkar raised the UK request as “one of the things that was floating around”. The Minister characterised Mr Varadkar’s comments as: “If I am asked, what are people’s views?”

Most of the Cabinet discussion on the unilateral UK declaration, according to sources, was on whether it would have legal standing in EU and international law. The view from both Dublin and Brussels was that it did not.

The final unilateral declaration said that if the UK believed the backstop was becoming permanent, Britain could take measures that would ultimately lead to its “disapplication”, although this would likely only be a temporary suspension of its provisions.