Any retreat by UK from Belfast Agreement unacceptable in US, Richard Neal says 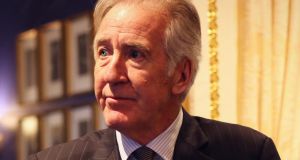 Congressman Richard Neal said the US did not want any “fractures” in the Belfast Agreement.

There is an anecdote Congressman Richard Neal tells to illustrate the changes that have taken place in Northern Ireland.

In 1989 he was part of a delegation from the US Congress visiting the North.

“We were travelling from Donegal to Derry and the bus was stopped,” he says. “British soldiers with night vision and heavy armaments searched the bus. This was the era of sandbags, of a heavy military presence in Northern Ireland.

“The last time I travelled from Donegal to Derry a few years ago my phone pinged to remind me I crossed the Border. It’s a reminder of how far everybody has come.”

Neal, a veteran congressman from Massachusetts, has long been a close follower of Irish affairs on Capitol Hill. He played a central role in US efforts to advance the peace process in Northern Ireland.

When Gerry Adams was granted a visa by the United States in 1994, Neal was the first senior US figure to travel to Northern Ireland, visiting the Sinn Féin president on the Falls Road. He has also worked closely with figures such as John Hume of the SDLP and Peter Robinson of the DUP.

But 21 years on from the Belfast Agreement, many on Capitol Hill are concerned that the advances made in Northern Ireland have been thrown into jeopardy by Brexit.

The last few months have seen renewed interest by senior members of Congress in the North amid heightened concern about the impact of Brexit.

A resolution opposing the reimposition of a hard border in Ireland is now under consideration by the House foreign relations committee.

On Monday, 22 members of Congress wrote to British prime minister Theresa May calling on her government to honour the terms of the Belfast Agreement.

The letter warned that any future free-trade agreement between the US and the United Kingdom could be delayed “indefinitely” if there was a return to a hard border.

On this issue, Neal has clout. In January he was appointed chairman of the ways and means committee in the House of Representatives. As well as its role in scrutinising the president’s financial affairs – the committee is preparing to demand Donald Trump’s tax returns – it also has authority over trade deals.

Though Neal says he supports the idea of a future trade deal with the UK, he says he has warned the British ambassador and the US trade representative Robert Lighthizer that there could be no return to a hard border between Northern Ireland and the Republic.

“I have told them, before we proceed to any negotiation on a bilateral trade agreement with the United Kingdom . . . we need a firm commitment on no hard border,” he says.

“America is a guarantor of the Good Friday [Belfast] Agreement, and we don’t want to see any fractures. The idea that there would be any sort of tactical retreat on the border is unacceptable here.”

That threat is weighing heavily on British representatives in Washington and in London. The promise of a future trade deal with the US following Brexit was a key focus of those loudest in demanding an EU exit, given that Britain exports more than £100 million worth of goods to the US each year.

Neal also intends to raise the appointment of a special envoy to Northern Ireland with Trump at the annual speaker’s lunch on Capitol Hill this week.

As for the ongoing political impasse in Northern Irish politics, Neal will hold private meetings with DUP leader Arlene Foster and Sinn Féin leader Mary Lou McDonald this week in Washington, at which he will urge a return to power-sharing.

“The parties need to go back to the Assembly. In a representative democracy, the shouting should be done in the crucible of politics. That’s why politics is a substitute for war,” he says.

Nonetheless, he is under no illusion about the implications of the DUP’s decision not to back the withdrawal agreement this week.

“We all acknowledge that unionists had the longest walk to the table when it came to the peace process. They had to give up something,” he says. “But ultimately, 56 per cent of people in Northern Ireland voted to stay in the European Union. Now, Northern Ireland will be seeking a trade deal with the United States. The economic implications could be significant.”