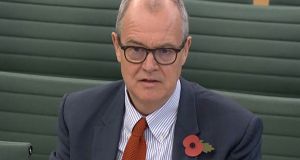 “As of today, it’s actually breached 10,000 people in hospital. So I think you don’t need too much modelling to actually tell you you are on an exponential upward curve. What we know, with all epidemics, is that epidemics are either doubling or halving. This is currently doubling,” he said.

“The way you prevent those services being impinged on, and potentially being slowed right down or even in some cases cancelled, is to keep the Covid rates down. If you don’t, then that is going to erode the NHS capacity to do not just the Covid care, but actually the non-Covid care as well.”

Prof Whitty appeared alongside chief scientific adviser Patrick Vallance before Westminster’s science and technology committee as England prepares to enter a four-week national lockdown on Thursday. Sir Patrick said models projecting up to 4,000 deaths a day during the pandemic’s second wave were not meant to scare people but he admitted that the data had not taken into account the impact of the current tiered system of local restrictions.

“I think I positioned that as a scenario from a couple of weeks ago, based on an assumption to try and get a new reasonable worst-case scenario. And if that didn’t come across then I regret that,” he said.

“Those figures were ones done by major academic groups based on those assumptions and, in the spirit of trying to make sure that things are shared and open, they are the things that we have seen [in the data so far], and it’s important and I think people see that.”

MPs will vote on the lockdown on Wednesday after Boris Johnson promised Conservative backbenchers that the House of Commons would get another vote on what happens after the restrictions end on December 2nd. The prime minister told his cabinet on Tuesday he was confident that four weeks was enough to get the virus’s reproduction rate below one so that the number of coronavirus cases would start to fall.

He acknowledged disquiet on his own back benches over the restrictions but said the lockdown was necessary to prevent the National Health Service from being overwhelmed.

“Let’s be in no doubt none of us came into politics to introduce measures like this. We don’t want to be doing things to repress liberty, we don’t want to do anything to damage our economy, to stop business from going about their lives, to stop anybody from doing what they wanted to do,” he said.

“We have a very clear way ahead. These measures – the crucial thing to understand is that they expire on December 2nd. They come to an end. And we therefore as a government and indeed as a country have a deadline and a target to develop solutions which previously . . . did not exist.”