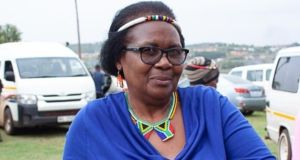 South African anti-mining activist Fikile Ntshangase suspected her life was in danger in the days before a group of men gained entry to her rural home in KwaZulu-Natal Province and shot her dead.

A week before the outspoken Ntshangase was murdered on October 22nd, the 65-year-old grandmother messaged confidants about her safety concerns, according to fellow environmental activist and friend Sheila Berry.

“Fikile had received repeated death threats over her opposition to the local mining activities. She lived in an isolated area and was frightened,” Ms Berry said. “She texted me one evening in mid-October to say her dogs were agitated and that she feared someone was outside watching her.

“On the night of the murder, men came to Fikile’s house requesting a drink of water. When they asked her grandson could they thank Fikile, the boy let them in. They then shot her five times,” said Ms Berry, who is working closely with independent investigators looking into the murder.

A vocal member of the Mfolozi Community Environmental Justice Organisation (MCEJO), Ms Ntshangase was opposed to plans to extend the Somkhele coal mine, one of South Africa’s largest open-cast mines, because of concerns over its environmental impact.

The controversial coal mine is situated next to Hluhluwe-iMfolozi Game Park, the oldest nature reserve in Africa, and environmentalists fear its expansion could have devastating consequences for the surrounding habitat.

The mine’s owner, Tendele Coal, is involved in two legal battles with MCEJO, one of which seeks to have the miner’s activities at Somkhele suspended until, MCEJO claims, it complies with environmental and other laws. That case begins at South Africa’s supreme court of appeal on November 3rd.

MCEJO has also made a second application to Pretoria high court, asking it to set aside Tendele’s latest mining right, issued in 2016, which covers a 222sq km area west of Richards Bay in KwaZulu-Natal.

The company maintains it is operating legally and that the mine’s expansion is necessary to remain viable and retain its workforce. If it cannot expand, 1,600 jobs will be lost, it says.

Those opposed to Tendele say its mining activities are negatively impacting local communities’ air, water and soil quality as well as the residents’ health.

Tendele and community leaders have condemned Ms Ntshangase’s murder and other recent acts of violence and intimidation against families in the area.

According to news agency Groundup, at least two of the 20 families who refuse to be relocated from their ancestral lands to make way for the mine’s extension were targeted earlier this year in drive-by shootings.

Tendele has linked these incidents to community concerns over potential job losses if its operations are not extended.

An October 27th statement issued by Tendele and local leaders called for “calm and leadership on the ground” in Somkhele, but it also continued to warn that the mine’s closure would have a “devastating” impact on impoverished communities where unemployment is rife.

“As I understand it, there is a hit squad in the area targeting people who are opposed to the mining,” he maintained.

Mr Tsunga said although there was no evidence linking Tendele to the violence, the way the company dealt with opposition to its activities had exposed the activists to danger.

“The company has publicly named those [groups] who oppose its mine extension. This raises tensions in the communities and the anti-mining activists then become targets,” he said.

Global Witness’s latest figures show that a record 212 land and environmental defenders around the world were murdered in 2019, an increase of 46 on 2018’s tally. But South Africa is not listed among the countries where these murders have occurred.

Nevertheless, Mr Tsunga maintained that the country, which recorded more than 21,000 murders last year, had become an increasingly dangerous place for anti-mining activists, environmentalists and human rights defenders in which to operate.

“Many activists have been murdered here over the last few years, but it is often difficult to link their deaths to their activism, even though we suspect that is often the case,” he said.