If UK prime minister cannot move on customs, there can be no Brexit deal 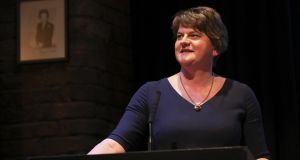 There were few enough laughs at Manchester’s Comedy Store on Monday when Arlene Foster joined Conservative Brexiteers John Redwood and Mark Francois at a meeting titled Brexit: The Moment of Truth. The DUP leader certainly didn’t see the funny side of the way her remarks a day earlier about a time-limited Northern Ireland backstop had made the headlines.

“I’m always amazed by the way my remarks are reported. I didn’t say that we would accept it, I said that we would look at it. There is a world of a difference. When asked a direct question I said I would look at a time limit. That’s a world away from saying that we were now advocating that,” she said.

Foster was right. What she said on Sunday was simply a restatement of the DUP’s openness to considering a time-limited backstop, which other senior party figures have articulated over the past year. She pointed out that Taoiseach Leo Varadkar had rejected a time limit. And Boris Johnson’s government has made clear it is not interested in negotiating a time-limited backstop.

The excitement over Foster’s comments about a time limit was a distraction from her much more significant remarks on Sunday about what the DUP was willing to back as an alternative to the backstop. She rejected any regulatory divergence between Northern Ireland and Great Britain beyond agri-food and ruled out a compromise on customs that would see Northern Ireland treated as part of the customs territory of both the EU and the UK.

The DUP may prove to be more flexible over regulation in the coming weeks, but the party is unwilling to budge from its tough line on customs. This is because the party believes that customs are inextricable from national sovereignty and that to leave Northern Ireland in the EU customs union would be to undermine its place in the union.

The DUP’s 10 seats amount to less than a quarter of Johnson’s deficit in the House of Commons but they remain a crucial player in the Brexit negotiations. DUP support for any deal the prime minister brings back from Brussels could persuade all but a handful of Conservative Brexiteers to back it.

But if Johnson cannot move on customs there can be no deal, because the EU believes that, without customs declarations and checks, it cannot know what is coming into Northern Ireland from Great Britain in order to protect the single market.