China hits back at US sanctions threat over Uighur rights abuses 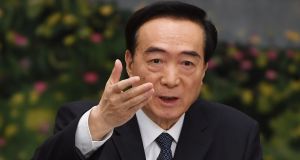 Chen Quanguo, Chinese Communist Party chief in Xinjiang, who has been identified in a Bill passed by the US House of Representatives as a potential target for sanctions over human rights abuses of Uighurs and other Muslim minorities. Photograph: Greg Baker/AFP via Getty Images

Beijing reacted angrily on Wednesday after the US House of Representatives passed a Bill that could lead to tough sanctions for human rights abuses in China’s Xinjiang province, threatening retaliation and calling the move a vicious attack on the Chinese government.

“We urge the US to correct its mistakes at once, prevent this Bill from becoming law, and stop using Xinjiang-related issues to interfere in China’s internal affairs,” she said. “China will take further actions according to how the situation develops.”

The legislation passed by the House on Tuesday includes provisions that require the US president to sanction Chinese officials deemed guilty of human rights violations against the Muslim minority in Xinjiang. The Bill identifies Chen Quanguo, the province’s communist party chief, as one of the officials who should be subject to sanctions.

Revamping a Senate Bill passed in September, the legislation also proposes restrictions on the export of technology that could be used to surveil citizens in the region.

The Bill will now go back to the Senate for consideration, before moving to President Donald Trump for final approval.

The development threatens to disrupt trade talks between the world’s two largest economies as a new deadline looms for fresh US tariffs to take effect on Chinese goods.

Last week Mr Trump signed a different Bill supporting pro-democracy protesters in Hong Kong, a move that also riled Beijing and prompted it to sanction US non-profit groups and suspend its review of US military ships and aircraft visiting Hong Kong.

US Republican senator Marco Rubio said the Xinjiang Bill was “an important step in countering the totalitarian Chinese government’s widespread and horrific human rights abuses” in the province where the authorities were “working to systematically wipe out the ethnic and cultural identities of Uighurs and other Muslim minorities”.

The passage of the legislation was “a recognition that the US government cannot afford to stand idly by as millions of Uighur Muslims continue to be unjustly imprisoned, subjected to mass surveillance, and forced into labour camps by an autocratic regime”, said Democratic senator Bob Menendez, a member of the Senate foreign relations committee.

Omer Kanat, director of the US-based Uighur Human Rights Project, said the action by the US Congress “addresses the agony of the Uighurs” and gives them hope.

“Every speech on the House floor was a forceful indictment of crimes against humanity,” he said, adding that now that both the US Senate and the House had gone on record to address the crisis, he hoped other countries would follow suit and pass similar legislation.

As Beijing weighs up retaliatory moves, Hu Xijin, editor-in-chief of the Communist Party-backed Global Times, tweeted that the government was considering restricting visas for US diplomatic passport holders over their “odious performance” on the Xinjiang issue.

Last week The Irish Times published a report on the “China Cables”, a cache of Chinese government documents from Xinjiang that were leaked to the International Consortium of Investigative Journalists and shared with media partners.

The documents detailed how the policy of incarcerating ethnic minorities in Xinjiang has been run on an industrial scale since 2017.

After reviewing the cables and other related evidence, Adrian Zenz, an expert on Uighur affairs, described the province’s detention centres as “the most systematic campaign of mass surveillance and mass oppression the world has ever seen”, including what is probably the “largest incarceration of an ethno-religious minority since the Holocaust”.