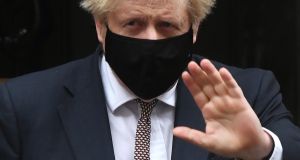 UK prime minister Boris Johnson: The success of the vaccination process, depends on us not finding out the South African or Brazilian variants are vaccine resistant,” he said. Photograph: Chris J Ratcliffe/Getty Images

The British prime minister was speaking after the UK recorded 1,564 coronavirus deaths, the highest daily figure since the pandemic began, bringing the total death toll close to 85,000.

“If you ask me when do we think that the ICU capacity is likely to be overtopped, I can’t give you a prediction for that. But all I can say is that the risk is very substantial and we have to keep the pressure off the NHS and the only way to do that is to follow the current lockdown,” he told the House of Commons liaison committee.

Mr Johnson said earlier that there were signs that the latest lockdown was working as the number of new coronavirus cases has fallen and in some of the worst-hit parts of England, hospitalisations are falling. But chief scientific adviser Patrick Vallance warned that, although infections were falling, the death rate would remain high for a number of weeks.

“The daily numbers jump around a bit but I think we are in a position now, when you look at the number of infections we’ve had over the past few weeks and how this is likely to continue, so I don’t think they’re going to drop very quickly, that I’m afraid we’re in a period of high death numbers that’s going to carry on for some weeks, it’s not going to come down quickly even if the measures that are in place now start to reduce the infection numbers. So we’re in for a pretty grim period, I’m afraid,” he told ITV’s Peston show.

Scotland’s first minister Nicola Sturgeon said on Wednesday that she was tightening the rules to ban the outdoor consumption of alcohol and to limit click and collect services to essential goods.

Mr Johnson also refused to rule out further restrictions as Labour leader Keir Starmer called for the lockdown in England to be tightened.

Downing Street is reported to be considering closing nurseries and some workplaces and stopping people from exercising with one other person, as they are now allowed to do. Mr Johnson told the liaison committee that he could not guarantee that schools will reopen after the midterm break in mid-February.

“The priority is obviously to get schools open as soon as possible, whether we can do that after the half term depends on a number of things. The success of the vaccination process, depends on us not finding out the South African or Brazilian variants are vaccine resistant,” he said.

“We have no evidence that they are, but that’s got to go well. But the crucial thing is the lockdown measures have to go well. What we are seeing today is some early signs of progress in containing the virus, but it is far, far too early to say if we can see any relaxation in February.”