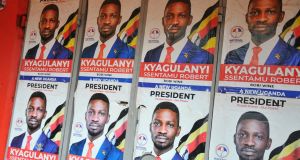 Uganda has blocked internet access nationwide ahead of Thursday’s elections – the most anticipated elections in the country in decades.

Former rebel leader Yoweri Museveni, who has been president since 1986, is pitted against 10 other candidates, including Bobi Wine, a hugely popular musician half his age.

Wine, whose real name is Robert Kyagulanyi, has enthused a new generation of voters while gaining international attention, speaking about the need for change while donned in his trademark red beret.

In a televised address on Tuesday evening, Mr Museveni said a decision to block Facebook came after the social media giant shut down numerous accounts associated with Uganda’s ruling National Resistance Movement party, which had been accused of “co-ordinated inauthentic behaviour” aimed at manipulating the result of the election.

“This is unfortunate but it’s unavoidable,” said Mr Museveni. “There’s no way anybody can come and play around with our country to decide who is good, who is bad, we can not accept that. Therefore I am sorry about the inconvenience. But we cannot tolerate this arrogance.”

Other social media and online messaging services were also blocked earlier in the week – the third election in a row where this has happened. The websites of many popular VPNs are also inaccessible, meaning supporters couldn’t follow a Sunday directive from Mr Wine to download them. Many users said the internet had slowed down completely.

Then, on Wednesday evening, most providers shut off the internet completely.

“Such shutdowns are a violation of the right to freedom of expression and access to information,” said Sarah Jackson, Amnesty International’s deputy regional director for East Africa. “The move is clearly intended to silence the few accredited election observers, opposition politicians, human rights defenders, activists, journalists and bloggers who are monitoring the elections.”

On Wednesday, the US announced that it would not have election observers at Thursday’s elections. In a statement, US ambassador Natalie E Brown said more than 75 per cent of the requested accreditations for observers had been denied. “With only 15 accreditations approved, it is not possible for the United States to meaningfully observe the conduct of Uganda’s elections at polling sites across the country.”

The European Union is also officially not observing the elections, saying that there was no progress made “on recommendations provided by previous EU electoral missions”.

This week, a heavy police and military presence has been visible around capital city Kampala. Police announced they will take over the rooftops of raised buildings within the city, saying otherwise they could be used by “rioters” to observe the movements of security personnel.

In his televised Tuesday address, Mr Museveni – who was wearing a camouflage jacket – told citizens to “keep peace”, while saying the security forces were ready to act against “threats”. “You saw how the riot was defeated in Kampala here,” he said, referring to November protests when at least 54 civilians were killed by security forces. “There’s no threat we cannot defeat . . . We have got all sorts of means.”

Mr Museveni has accused Mr Wine of being an “agent of foreign interests”.

“[Wine] gets quite a lot of encouragement from foreigners and homosexuals,” he told Channel 4 News last week. “Homosexuals are very happy with Bobi Wine. I think they even send him support.”

Polls will be open between 7am and 4pm, and results are expected within 48 hours of them closing.