Coronavirus: UK expected to move to next phase of fighting outbreak 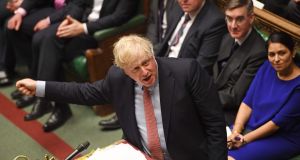 British’s prime minister Boris Johnson will chair an emergency Cobra meeting where the decision will be made to move from the ‘containment’ to the ‘delay’ stage. Photograph: Jessica Taylor/UK Parliament/AFP via Getty Images

Britain is expected to move on Thursday into the next stage of its strategy to combat the coronavirus, encouraging “social distancing” to slow the spread of the disease. Boris Johnson will chair an emergency Cobra meeting where the decision will be made to move from the “containment” to the “delay” stage.

This will see the focus shifting from containing the virus by identifying infected people and their contacts to slowing its spread through the community.

It is likely to see more workers being encouraged to work from home as well as the cancellation of mass events. The authorities hope that such social distancing can help to flatten the peak of the virus’s spread, delaying many infections until winter pressure on the NHS has eased.

On Wednesday the government unveiled a £30 billion (€34 billion) package of emergency measures to ease the economic impact of coronavirus, promising unlimited financial resources to the National Health Service (NHS) to fight the virus.

Chancellor of the exchequer Rishi Sunak announced the measures in his budget hours after Nadine Dorries, a health minister, said she had tested positive for the virus.

Mr Sunak outlined a three-point plan for addressing the virus, including as much funding as the NHS requires, extending sick pay to the self-employed and a promise to pay the sick pay bill for small and medium-sized businesses for up to 14 days.

“I know how worried people are. Worried about their health, the health of their loved ones, their jobs, their income, their businesses, their financial security. And I know they get even more worried when they turn on their TVs and hear talk of markets collapsing and difficult times coming,” he said.

“People want to know what is happening and what can be done to fix it. What everyone needs to know is we are doing everything we can to keep this country and our people healthy and financially secure. We are clear that this is above party.”

Mr Sunak earmarked £5 billion for an emergency fund for the NHS to deal with the virus but he said that sum could be increased to give the health service whatever it needed, whether it was “millions or billions”.

Statutory sick pay will be available to all those who are told to stay at home because of the virus, whether they are displaying symptoms or not. A £500 million hardship fund will help people in need who are affected financially by the virus. And retail, entertainment and hospitality businesses with a rateable value below £51,000 will pay no business rates for the next year.

During prime minister’s questions earlier, the Scottish National Party’s (SNP) Ian Blackford contrasted Britain’s sick pay rate of £94.25 per week with Ireland’s rate, which was increased this week to the equivalent of £266 a week.

The prime minister said Britain was unlike other European countries in having “a universal free health system, free at the point of delivery” and “an extensive benefits system, free for people across this country”.

Coronavirus reached Westminster on Tuesday night with the news that Ms Dorries, a mental health minister and the Conservative MP for Mid Bedfordshire since 2005, has been diagnosed with it.

Ms Dorries was at Westminster last week and met hundreds of people, including dozens who attended a reception with her at 10 Downing Street that was hosted by Mr Johnson and his fiancee Carrie Symonds.

“I can confirm I have tested positive for coronavirus. As soon as I was informed I took all the advised precautions and have been self-isolating at home,” Ms Dorries said in a statement.

“Public Health England has started detailed contact tracing and the department and my parliamentary office are closely following their advice. I would like to thank PHE and the wonderful NHS staff who have provided me with advice and support.