What strategies did Asia use to slow down coronavirus?

South Korea, Singapore, Hong Kong, Taiwan have all had some success in battling spread of Covid-19 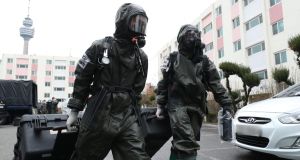 South Korean soldiers from the Armed Force CBR Defense Command wearing protective gear enter a building for disinfection work at a closed apartment complex after 46 residents were confirmed to have the COVID-19 coronavirus, in Daegu, South Korea. Photograph: Yonhap / AFP / South Korea OUT via Getty Images 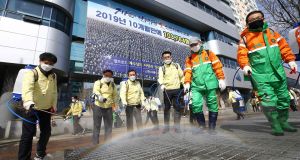 South Korean government officials spray disinfectant in front of the Daegu branch of the Shincheonji Church of Jesus Photograph: YONHAP/AFP via Getty Images

From Singapore to South Korea, countries across Asia have been mobilising for weeks in an attempt to contain the spread of the coronavirus. Some have had successes, combining mass-testing, technology and social distancing to stem the tide of infections. But uncertainty over the virus’s future course means the region is not out of the woods yet.

South Korea: drive-through testing, mobile alerts, mass screening
South Korea has the highest number of cases outside China but on Tuesday reported its slowest single day rise in two weeks, prompting president Moon Jae-in to suggest the country was about to enter a “phase of stability”.

His optimism might have been slightly premature, as there were 242 new cases on Wednesday. However that is still a large drop from a peak of 916 on February 28th.

Mr Moon told aides this week: “We must maintain this trend. We have come this far thanks to the citizens who were united and cooperated well with the government. But it’s too early to be optimistic. Please be a little bit more patient and stay away from mass gatherings such as religious events.”

The reference to religious events was significant. More than 60 per cent of cases in South Korea have been linked to a branch of the Shincheonji Church of Jesus, a secretive religious sect, in the south-eastern city of Daegu. While the outbreak placed huge strain on the city’s medical services, new infections appeared to slow after health authorities completed Covid-19 tests on 210,000 Shincheonji followers. Identifying so many cases among a single group, and in a relatively confined geographical area, appears to have helped slow the rate of infections.

South Korea’s government opted against localised lockdowns, concentrating instead on testing large numbers of people in an attempt to identify infection “hotspots”, along with encouraging social distancing. As one of three designated “special care zones”, Daegu received extra medical supplies and staff, and troops were sent to disinfect the streets.

The country is conducting about 15,000 tests a day, free of charge, and has carried out almost 200,000 screenings so far. It has also set up about 50 drive-through testing centres and distributed smartphone alerts about the movements of people who have tested positive.

Not everyone shares Mr Moon’s optimism. Noting that outbreaks had been observed at nursing homes and small hospitals, the conservative JoongAng Daily accused the government of “patting itself on the back” ahead of next month’s national assembly elections.

Singapore: financial support, clear messaging, big fines
In the early stages of the outbreak Singapore appeared particularly hard hit. By mid-February it had recorded 58 infections, one of the highest numbers confirmed by any country outside China.

Though the outbreak is far from over, the number of new cases emerging has appeared to slow over recent weeks, and 78 of 160 patients who tested positive have since recovered.

“We don’t do anything different, we just do it well,” said Dale Fisher, professor at the National University of Singapore and chair of the Global Outbreak Alert and Response Network at the World Health Organisation.

Singpore, a major business hub with large numbers of international visitors, has a strictly enforced home quarantine system and an exhaustive contact-tracing programme. This is underpinned by clear messaging from officials, who have repeatedly emphasised the need for collective social responsibility, said Fisher. Authorities have also warned of harsh penalties for those who break guidelines.

Since the start of the outbreak thousands of people in Singapore have isolated themselves. Anyone required to do so can be called multiple times a day and asked to click an online link sharing their phone’s location. Officials also carry out spot checks in person to ensure compliance. Those who do not stay home can expect a fine of up to $10,000 or up to six months in prison.

There is some financial support for people who are isolated: self-employed workers have been offered $100 per day, and people who are not able to remain isolated at home can stay in a government facility.

For this quarantining system to be effective, officials must track down affected people as quickly as possible. Contacts are being traced by the Singapore police force, who use CCTV as well as interviews with patients to draw up lists of people who may have been exposed. Though Singapore has introduced charges for visitors who require treatment, tests are free for all.

Officials have stressed that the number of cases is still likely to rise. The health minister Gan Kim Yong said many locally transmitted cases “were the result of the socially irresponsible actions of a few individuals” who continued to go out and mix with others despite having symptoms.

Some argue that other countries – especially those with large populations that were less willing to accept sweeping restrictions – would struggle to adopt the same approach as Singapore, which has a high quality health system. Officials have a tight grip on the media and have been accused by rights groups of using fake news laws to clamp down on critical opinions online.

“I don’t accept that it wouldn’t work [elesewhere],” said Mr Fisher, but he adds that officials elsewhere need to give clear and consistent public health messages. “If the community is not engaged then they won’t take the response seriously.”

Hong Kong and Macau: temperature checks, closed schools, free hand sanitiser
Hong Kong declared its first case of Covid-19 on January 23rd. As more cases emerged over the next three days, an emergency was declared and more than five days after the first confirmed case, the government began putting some restrictions on travel from mainland China. Schools were ordered not to return from the Lunar New Year holiday on February 3rd. Major theme parks, including the Disneyland resort, have been shut down.

The city of 7.4 million people, which is especially exposed to the virus because of its proximity to mainland China and daily inflow of Chinese visitors, has confirmed only 120 cases as of March 11th. Three people have died.

Online government resources detail Hong Kong’s cases, including the ages of infected patients and what parts of Hong Kong they live in. Maps also show the general location of the thousands of people under quarantine or self-isolation.

Not everyone credits the Hong Kong government for keeping the outbreak under control. Instead they say the community rose to the occasion, trained by their experience with the Sars outbreak in 2003 when Hong Kongers made up 299 of the world’s 774 death toll.

Very few people walk the streets of what is one of the world’s most densely populated cities. Nearly everyone wears a mask. Public transport is ghostly, stations are lined with public health posters, while repetitive announcements urge people to wash their hands regularly.

Numerous cafes, shops and offices check the temperatures of patrons and complimentary hand sanitiser is common. Some establishments turn away those whose temperatures are too high.

While other countries began barring travellers coming from China, chief executive Carrie Lam refused to shut Hong Kong’s borders, prompting protests and widespread criticism. The government eventually closed some border crossings and from February 8th required all arrivals from China to undergo self-quarantine for 14 days. That order was later extended to South Korea, Italy and regions of France, Germany, Japan and Spain.

By contrast the leaders of Macau, which also operates under the one-country-two-systems model, have been praised for their response.

In early February when Macau confirmed its 10th case, chief executive Ho Iat Seng announced they were shutting its $40 billion casino industry to slow the spread of the virus. Tour groups, largely made up of mainland Chinese visitors and a major contributor to Macau’s economy, were banned. Schools had already been closed.

Mr Ho had already said in January that Macau would deny entry to visitors who were from Hubei or who had been there in the last two weeks without medical clearance, and would deny them entry to casinos even with clearance.

Casinos reopened on February 20th and Macau authorities have flagged the possible restart of schools before April 20th, saying they believe Macau’s outbreak has stabilised. All 10 people reported to have fallen ill with Covid-19 have recovered.

Taiwan: a swift response, mask production, penalties for hoarding
Taiwan has been widely praised as setting best practice with its response to the virus.

The government coordinated its efforts through its national health command centre, established after the Sars outbreak, and integrated data from the national health, immigration and customs systems.

The island’s authorities were responding as early as December 31st when the first reports of a new and unidentified virus in China emerged.

Arrivals from Wuhan, where there were believed to be fewer than 30 cases of the new disease at the time, were inspected by health officials before disembarking planes.

Taiwan confirmed its first case of Covid-19 on 21 January, a 50-year-old woman returning from Wuhan, and the first domestic case one week later.

Primary and secondary schools were kept shut until 25 February.

By 11 March Taiwan had tested almost 15,000 people for Covid-19. It had confirmed 48 people contracted the illness, of which 17 had been released from isolation. One person died.

Taiwan, which has been blocked by Beijing from being part of the World Health Organization, has complained that it is not getting first-hand information about the epidemic. – Guardian