Coronavirus: More than half of England under tighter restrictions 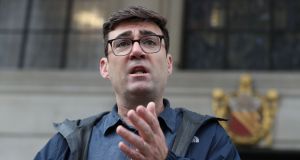 More than half of England’s population will be under enhanced coronavirus restrictions after London and a number of other areas were moved into the Tier 2 or high-risk category. The move came as Manchester’s mayor Andy Burnham said his city should not join Liverpool in semi-lockdown under the highest Tier 3 category without more financial help.

“Greater Manchester, the Liverpool City Region and Lancashire are being set up as the canaries in the coal mine for an experimental regional lockdown strategy as an attempt to prevent the expense of what is truly needed,” he said.

“They are asking us to gamble our residents’ jobs, homes and businesses and a large chunk of our economy on a strategy that their own experts tell them might not work. We would never sign up for that.”

A former Labour MP, Mr Burnham backs Keir Starmer’s call for Boris Johnson to put the whole of England under a temporary lockdown lasting two or three weeks. Tier 3 restrictions would see pubs close unless they can operate as restaurants and people banned from associating with members of other households indoors or outdoors.

“The situation in the northwest of England is severe. The number of cases is rising exponentially, the number of people in hospital with Covid has doubled in just the last 12 days. So I call upon local leaders to set aside this party politics and to work with us to put in place the measures that are needed in Greater Manchester, across the northwest, so that we can deal with this virus and support people through it,” he said.

“This is a time for people to come together so that we can control this virus.”

London’s Tier 2 restrictions forbid people from different households from socialising in any indoor setting and discourage them from using public transport. Pubs and restaurants will be allowed to remain open but customers will only be allowed to drink or dine with members of their own household unless they are meeting someone in connection with work.

Unlike Mr Burnham, London’s Labour mayor Sadiq Khan has been pressing the government to move the city into Tier 2 as daily infections have been doubling every week.

“Nobody wants to see more restrictions, but this is deemed to be necessary in order to protect Londoners by myself, London council leaders and ministers. As part of our discussions, I’ve also made clear to the government that we need more financial support for London’s businesses, workers and public services as we face more restrictions – and we will continue to make this case,” he said.

“In London, we experienced the worst of Covid-19 back in the spring. Thousands of lives were lost and our economy has been left reeling. We simply can’t afford for the government to be slow to act again.”