‘We cannot fool ourselves,’ says PM hours after new restrictions imposed in northwest

UK PM Boris Johnson said that despite progress being made in combating Covid-19, the UK cannot think it is exempt from a rise in cases. 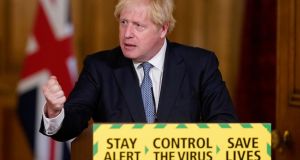 Boris Johnson: “With those numbers creeping up our assessment is that we should squeeze that brake pedal in order to keep that virus under control,” he said. Photograph: Andrew Parsons/10 Downing Street Handout/EPA

Boris Johnson has put the handbrake on a further reopening of the English economy by postponing plans to reopen bowling alleys, casinos and ice rinks from Saturday – for at least another fortnight.

The British prime minister has postponed pilot schemes to allow spectators back into sporting events and gigs before the autumn as coronavirus cases rose across Europe. He has also delayed plans to allow wedding receptions of up to 30 people.

At the same time the mandatory wearing of face coverings will be extended from public transport and shops to other public settings such as museums and cinemas from August 8th.

The announcement came just hours after the UK government imposed new restrictions on swaths of northwest England, where indoor meetings of two separate households are now banned – a move that affects more than 4m people. The Scottish government has advised against travel to those parts of northern England.

Mr Johnson said it was his responsibility to look at national measures. “With those numbers creeping up our assessment is that we should squeeze that brake pedal in order to keep that virus under control,” he said.

However, the government will proceed with plans to pause the “shielding” programme for the most vulnerable people and will still encourage some workers to return to offices from next week. The previous advice to work from home if possible will be scrapped tomorrow.

Claire Walker, co-executive director of the British Chambers of Commerce, said the moves came as a “hammer blow” to business.

“While tackling the public health emergency must be the priority, these announcements – made at short notice – will be a hammer blow to business and consumer confidence at a time when many firms were just starting to get back on their feet.”

The prime minister, speaking at a press conference in Downing Street, cited the latest data from the Office for National Statistics that showed the prevalence of the virus in the community had increased week on week. The ONS described it as a “slight rise”.

“Some of our European friends are struggling to keep it under control,” he said. “We can’t fool ourselves that we are exempt. We have to be willing to react to the first signs of trouble . . .We just can’t afford to ignore this evidence.”

Mr Johnson had announced the further easing of those restrictions on July 17th as part of a wider announcement. But ministers have always warned that any relaxation of the lockdown would be subject to the trajectory of the coronavirus epidemic.

Chris Whitty, the UK’s chief medical officer, said that the government had reached the outer limits of how far the lockdown could be eased. “The idea we can reopen everything and keep the virus under control is clearly wrong,” he told the press conference. “We are at the outer limit of what we can do, so choices will need to be made.”

The prime minister said the number of people being admitted to hospital was still falling, but he said: “I’ve consistently warned that this virus could come back and we would not hesitate to take swift and decisive action as required.”

He also warned that unless people followed the rules, the government could have to impose further restrictions on their freedoms. People should proceed with domestic holidays, he said.

The ONS said the latest figures for the week from July 20-26th showed the number of people infected nationally had risen to about one in 1,500 compared with about one in 2,000 the week before.

An estimated 35,700 people had the virus in England last week, according to the ONS figures, which exclude cases in hospitals, care homes or other institutional settings. This compares with 27,700 people between July 13th and 19th.

The UK government has also this week imposed new quarantine restrictions on travellers entering the country from Spain and Luxembourg to prevent the virus being imported from Europe. – Copyright The Financial Times Limited 2020