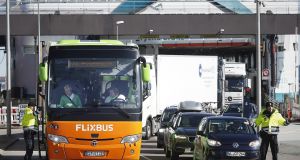 Passengers disembarking a ferry from Sweden in Elsingoere, Denmark before the borders closed in March. Photograph: Claus Bjoern Larsen/Ritzau Scanpix/AFP via Getty Images

Denmark is opening its borders to neighbouring Sweden for the first time in nearly five months after it became one of the few European countries with a falling number of coronavirus cases.

After two months with the highest death rate per capita in Europe, Sweden has lost that status to the UK in recent days, while its number of new cases has been in steady decline for the past month.

Denmark is the first of Sweden’s neighbours to loosen its entry requirements for all Swedes after it, along with Norway and Finland, refused to open their borders in May. Stockholm’s lighter-touch approach to Covid-19 containment had led to significantly higher death rates than the other Nordic countries.

“It was expected since we have come down to such low levels in Sweden now,” said Anders Tegnell, Sweden’s state epidemiologist.

Falling case numbers in Sweden contrast with the rest of Europe, where officials are worried about the resurgence in coronavirus infections.

Swedish public health authorities on Thursday extended their recommendation for Swedes to work at home if possible until the end of the year.

Mr Tegnell told a press conference that the number of Covid-19 cases in Sweden had gone down “faster than many of us dared hope for” but insisted that the recommendation for remote working would remain, not least to avoid crowds on public transport.

Sweden refused to follow the rest of Europe into formal lockdown in March, arguing that measures such as closing schools and borders would do little to stop the spread of the disease.

The government’s scientific advisers have insisted that reaching so-called “herd immunity” – where a sufficient proportion of the population has had the virus that its transmission slows significantly or stops – was not a goal. However, Mr Tegnell has said on numerous occasions that the capital, Stockholm, could be nearing that level soon.

The decision of the other Nordic countries to close their borders to Sweden had strained the normally close co-operation in the region, and caused some acute economic problems in areas close to the border.

Norway has gradually opened up to several regions of Sweden, including one of two hubs for cross-border shopping, but Denmark is the first to put Swedes on the same footing as other Europeans. Entry into Denmark is not entirely free, however. Visitors will need to show they have a “worthy purpose” for being there or are staying at least six nights.

On Thursday, Norway changed its travel advice for Belgium, advising Norwegians against all but essential travel there from the weekend. Anyone returning after that would need to quarantine for 10 days. Oslo announced the same requirements for Spain, where cases have surged, earlier in the week. This came a day before the UK announced similar restrictions on arrivals from Spain. – Copyright The Financial Times Limited 2020