Coronavirus: Boris Johnson says UK and Ireland are on ‘the same path’ 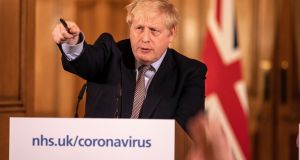 Boris Johnson has expressed confidence that his government’s measures against coronavirus will be as effective in protecting people against it as the actions taken in Ireland.

“If you look at what’s happening overall, the UK and Ireland are on very much the same path,” he said.

“We are in daily contact with our counterparts in the Taoiseach’s office and so on to make sure that we’re co-ordinating things as much as we reasonably can.”

Britain’s prime minister was speaking minutes after he announced a dramatic intensification of measures against the virus. He said everyone in Britain should avoid non-essential contact with other people and stay away from bars, clubs, restaurants and theatres.

He urged everyone who can work from home to do so and said extra measures would be needed to shield vulnerable groups such as those over 70 and people with specific medical conditions from the virus.

The new advice stops short of closing schools, although chief scientific adviser Patrick Vallance said the government could take that step later. Sir Patrick insisted that, although Ireland had already closed schools, Britain’s new measures would be just as effective.

“I think the key thing is that the social distancing actions we’re taking around bars and restaurants and theatres and so on, which is a really important part of this, which is probably more extreme in terms of the action,” he said.

A further 19 people in England have died after testing positive for the coronavirus, bringing the total to 53. There has also been one death in Wales and one in Scotland.

This is going to be very disruptive for people who have such conditions but, I believe, it’s now necessary

Sir Patrick acknowledged that the shift in the government’s approach was prompted by evidence that the virus is spreading faster than anticipated.

“At the early stages in an outbreak, the numbers are quite small, so actually the precision with which you can predict exactly where you are is low. I said perhaps we were four weeks behind where Italy was. I think the new numbers suggest we’re maybe more like three weeks in terms of that,” he said.

“Importantly, it looks like we’re on the fast upswing or just about to get there and that’s the reason to want to get in quite quickly with these measures.”

Until now, the British government has advised people with a new, persistent cough or a fever to stay at home for seven days but has not invoked other social distancing measures. From now on, any member of a household showing symptoms of the coronavirus should stay at home for 14 days.

People without symptoms who do not live in a household with symptoms should avoid “non-essential contact” with others and stop all unnecessary travel.

Mr Johnson said that in a few days, people over 70 or with underlying health conditions will be asked to avoid social contact for around 12 weeks.

“The reason for doing this in the next few days, rather than earlier or later, is that this is going to be very disruptive for people who have such conditions, and difficult for them, but, I believe, it’s now necessary. And we want to ensure that this period of shielding, this period of maximum protection coincides with the peak of the disease,” he said.