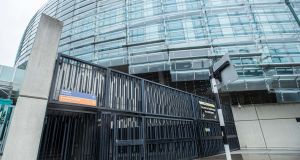 Leinster’s Champions Cup quarter-final against Saracens at the Aviva stadium has been postponed. Photograph: Tommy Dickson/Inpho

As expected, Leinster’s Heineken Champions Cup quarter-final against Saracens on April 4th at the Aviva Stadium, along with Ulster’s trek to Toulouse the next day have been postponed along with the other last eight ties in both that competition and the European Challenge Cup, due to the coronavirus pandemic.

Following on from the Pro14 and the Top 14 being suspended at the end of last week, the board of European Professional Club Rugby (EPCR) had no option but to suspend all of their quarter-final matches.

Amid the increasing likelihood of the entire rugby season being suspended indefinitely, the RFU and PRL have also suspended the Premiership for five weeks. With the Irish provinces, French clubs and now English clubs effectively in lockdown, rearranging the cross-border European quarter-finals will be a difficult task for EPRC, who will have to wait on developments within the three major European leagues.

The likelihood is that the summer tours will also be suspended, which might, at a push, afford some room for completing the various leagues this year, especially so in France and England given there is no cross-border element.

“Amid growing public health concerns due to the COVID-19 pandemic, the decision was taken during a conference call today (Monday, 16 March) to postpone the eight matches on the weekend in question and to suspend the European club rugby season,” said the EPRC statement.

“While respecting all further directives by governments and local authorities, EPCR, in conjunction with the relevant leagues and unions, remains committed to trying to find a solution which will enable it to complete the 2019/20 Heineken Champions Cup and Challenge Cup tournaments at such a time as that aligns with preventative measures undertaken by an overwhelming majority of sport’s governing bodies and tournament organisers in Europe.

“EPCR’s priority is the health and welfare of players and club staff, and an update regarding the knockout stages of the tournaments will be communicated to all stakeholders as soon as practicable.”