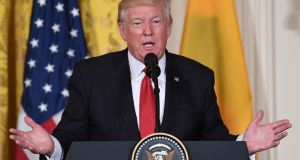 There are increasing signs the United States is poised to pull out of the Paris Climate Agreement, with US president Donald Trump due to make a decision imminently.

Mr Trump said on Wednesday he would make the announcement at 3pm (8pm Irish time) on Thursday in the White House Rose Garden, ending his tweet with “MAKE AMERICA GREAT AGAIN!”

The landmark agreement was signed in Paris in late 2015 and some 147 countries have now ratified the deal which seeks to reduce global warning by committing to keeping global temperatures below 2 degrees Celsius and reviewing each country’s commitments every five years.

But many in the Trump administration believe that the terms of the agreement were skewed against America.

The president met the head of the Environmental Protection Agency, Scott Pruitt, a climate-change sceptic at the White House on Tuesday, but he has also been seeking counsel from others who believe the US should stay in the global pact, including his daughter Ivanka, and son-in-law Jared Kushner.

Secretary of state Rex Tillerson is also said to be a supporter of the deal, but other advisers such as Steve Bannon are opposed, arguing that pulling out of the agreement would be in keeping with the president’s campaign pledge to prioritise American jobs, particularly in the coal and steel industry.

The White House is facing opposition from big business, however, with a number of senior executives and the US chamber of commerce opposed to withdrawing from the pact, arguing that the US needs to remain a member to compete globally for investment. They also argue that businesses have already made plans to invest in renewables and clean energy.

Divisions between the United States and its western allies on climate change were laid bare at last weekend’s G7 summit in Sicily, when Mr Trump refused to endorse a legally binding commitment on climate change.

“The entire discussion about climate was very difficult, if not to say very dissatisfying,” German chancellor Angela Merkel said after the meeting. “There are no indications whether the United States will stay in the Paris Agreement or not.”

Any move to quit the Paris deal would mark a major departure from former president Barack Obama’s policy on climate change.

Mr Trump has previously described climate change as a “hoax” while Mr Pruitt, a former attorney general of Oklahoma, holds similar views. He publicly queried whether human activity was a primary contributor to global warming.

“I think that measuring with precision human activity on the climate is something very challenging to do and there’s tremendous disagreement about the degree of impact, so no, I would not agree that it’s a primary contributor to the global warming that we see,” he said.

In a New York speech on Tuesday, UN chief António Guterres said it was “absolutely essential” that the world implemented the Paris Agreement.