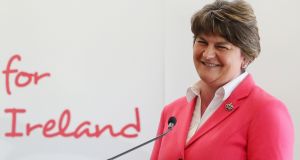 Unionists should use the Westminster election to remove any possibility of a Border poll on Irish unity for “generations to come”, the DUP leader Arlene Foster said on Wednesday when launching her party’s manifesto. As the DUP seeks to maintain or increase its current eight outgoing seats in the House of Commons, Ms Foster said Northern Ireland needed one strong unionist voice at Westminster and in the post-election negotiations aimed at restoring Stormont.

“Sinn Féin want to use this election as a precursor to a Border poll,” said Ms Foster at the manifesto launch in the South Antrim constituency where DUP candidate Paul Girvan is hoping to unseat the Ulster Unionist Party outgoing MP Danny Kinahan. “Gerry Adams has declared that this election will be a barometer on Irish unity. Let us rise to that challenge and seek to ensure that unionism still returns a majority of unionist MPs to Westminster and puts the notion of a divisive and destabilising Border poll off the agenda for generations to come – and certainly not in my lifetime,” said the DUP leader. Ms Foster added there was “no prospect of [a Border poll] succeeding”.

The DUP leader also addressed the continuing insistence by Sinn Féin that in the event of a return of Stormont, Ms Foster cannot be First Minister until the investigation into the Renewable Heat Incentive scheme is completed. It is estimated to take a year or more to conclude.

She said the DUP was the largest party in Northern Ireland, adding “The DUP – and I am the leader – will decide who will be First Minister, and not Sinn Féin”. She found it ironic that Sinn Féin would seek to determine who would be First Minister when, she said, its Northern Ireland leader Michelle O’Neill was “handpicked” by the Sinn Féin leadership rather than its membership. Ms Foster repeated that the March Assembly election, when Sinn Féin came within one seat and fewer than 1,200 votes of the DUP, was a “wake-up call for unionism”.

“As a direct consequence of that result Stormont has not been restored and public services are threatened. This election gives the people of Northern Ireland the opportunity to put things right,” she said. The DUP leader said that for her “the most important issue at this election is not devolution but the union itself”.

“My Britishness is not just about the passport I hold but the identity that I have. It cannot be reduced to a name or a badge, but it is a culture and a way of life. It is about decency and respect. It is about a shared history going back generations.”

Ms Foster said the Westminster outcome in Northern Ireland would have a direct impact in determining whether the Northern Assembly and Executive could be restored. She was jaundiced in her view of recent polls suggesting the possibility of a hung British parliament – “Polls come and go,” she said.

Referring to Sinn Féin’s refusal to sit in the House of Commons, Ms Foster said there was a “perverse logic” that a vote for Sinn Féin would give British prime minister Theresa May a “free hand on Brexit, on the Border and on the level of spending in Northern Ireland”.

On the post-election talks she said the DUP wanted devolution to work. “We will enter the negotiations with a positive approach and a goal of seeing the Assembly and Executive restored,” she said. The DUP would not set any preconditions but would judge any deal against five “core” tests: would it increase support for the North’s place within the union; was it consistent with remaining a “full and integral” part of the UK; was it compatible with British citizenship; would it be better than direct rule from London; and was it consistent with its Assembly manifesto.