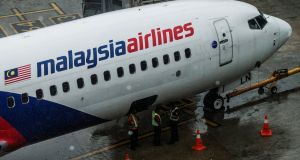 Malaysia Airlines: passengers and crew of Flight MH128 had to tackle a man and tie him up with seat belts until the flight landed. Photograph: Ahmad Yusni

A Malaysia Airlines flight from Melbourne to Kuala Lumpur returned to the Australian airport shortly after take-off late on Wednesday after a passenger attempted to enter the cockpit, authorities said.

Passengers and the crew of Flight MH128 had to tackle the man and tie him up with seat belts until the flight landed, one witness said.

The plane landed safely and the man was apprehended by airport security, said Malaysia Airlines, which is still recovering from two major airline disasters in recent years. The airline stressed in a statement the flight had not at any point been hijacked.

Flight MH128 returned to Melbourne’s Tullamarine Airport “after the operating captain was alerted by a cabin crew of a passenger attempting to enter the cockpit”, the statement said. It had departed at 11.11pm Melbourne time and returned at 11.41pm.

“Malaysia Airlines together with the Australian authorities will be investigating the incident,” the statement added.

Passengers disembarked safely from the aircraft and those affected were offered the next available flight or flights via other carriers, the airline said.

Arif Chaudhery, a passenger on board MH128, said about 30 minutes into the flight a male passenger attacked a female member of the cabin crew who screamed out for help.

“Some passengers and crew grabbed the man and tackled him to the floor,” Mr Chaudhery said, adding that seat belts were used to tie the man’s hands.

“We were very lucky. It could have been worse.”

Armed security personnel entered the plane to remove the disruptive passenger and then escort the others out, he said.

Malaysia’s deputy transport minister Aziz Kaprawi was quoted in the Star, a local news outlet, saying the passenger was drunk.

Malaysia Airlines has seen two major airline disasters in recent years. In 2014, Flight MH370 with 239 people on board went missing on its way from Kuala Lumpur to Beijing. The Boeing 777 plane has yet to be found and its location is one of the world’s greatest aviation mysteries. The deep-sea search for the missing plane was called off in January.

A few months after MH370 went missing, Flight MH17 from Amsterdam to Kuala Lumpur was shot down in eastern Ukraine.

The airline has struggled to recover from the twin tragedies, having to cut staff and restructure its business as passenger numbers fell. – (Reuters)