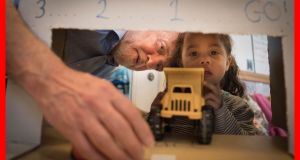 The leader of Britain’s opposition has had a recent run of form on the campaign trail ahead of next week’s election, reducing what had looked to be an unshakeable lead for Theresa May in the polls.

But Jeremy Corbyn stumbled on Tuesday morning as he appeared on the BBC’s Woman’s Hour radio programme to launch Labour’s plans for childcare.

Asked how much they would cost, Mr Corbyn was stumped. “It will obviously cost a lot to . . . we accept that. I’ll give you the figure in a moment,” he began, while trying to find the number on his iPad. Labour wants to extend 30 hours of free childcare to all two to four year olds.

“It’s quite troubling Mr Corbyn that you’re launching a major policy and you don’t know how much it costs. It hardly inspires the voters,” said the presenter, Emma Barnett, before giving the Labour leader the correct figure of £4.8 billion (€5.52 billion) a year.

Mr Corbyn’s supporters were quick to defend him, with Matt Zarb-Cousin, his former spokesman, saying: “Just a reminder that the success of a policy does not depend on a politician having the costing imprinted on their memory at all times.”

But fiscal discipline has traditionally been seen as an area of relative weakness for the Labour Party and the Conservatives were quick to jump on the blunder.

Priti Patel, international development secretary, described the interview as “shambolic” and said Mr Corbyn “isn’t up to the job of leading our country through the challenges ahead” such as Brexit.

Barnett, meanwhile, was attacked by Mr Corbyn’s supporters, who posted a string of ugly and anti-Semitic messages. Denis MacShane, a former Labour MP, said that one tweet labelling Barnett as a “Zionist” was “utterly disgusting”.

Mr Corbyn’s personal ratings have improved substantially since April, with a recent poll by YouGov showing that 28 per cent of people thought he would be the best prime minister, with 45 per cent opting for Ms May. He has only recently moved above the 20 per cent mark.

In a televised interview on Monday night Mr Corbyn appeared relaxed as he shrugged off difficult questions about whether he supported the IRA, his opposition to the 1982 Falklands war and his reluctance to authorise a drone strike on an Isis terrorist.

His subsequent stumble on Tuesday morning raised questions over whether he is beginning to tire after a relentless election campaign.

Separately, Ms May issued dire warnings on Tuesday about the dangers of Britain failing to secure a good Brexit deal while also threatening to walk away with no deal at all.

The prime minister said in Wolverhampton that “the terms of the Brexit deal we negotiate with the EU . . . will define our country for generations to come”.

“Our place in the world, our economic security, the vital public services upon which we all rely, our future prosperity – everything depends on, and will be defined by, the outcome of these next five years.”

In the closing stages of the UK election campaign, Ms May has returned to Brexit as the main focus, arguing that only she can deliver a good deal that would ensure that the UK economy can flourish and public services are well-funded.

In her speech in Wolverhampton, the prime minister stepped up her attacks on Mr Corbyn, saying the Labour leader did not have “the belief, the will or the plan to deliver Brexit”.

“With his position on Brexit, he will find himself alone and naked in the negotiating chamber of the European Union, ” she said. – Copyright The Financial Times Limited 2017