London Letter: Four revellers were asked to leave Mass when attendance was not so low 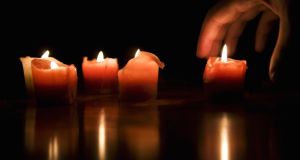 'I was about to light a votive candle for Eric Douglas when my eye was caught by a movement in the shadows.'

The air inside the church felt cold and damp, perfumed with traces of burnt incense, melting candlewax, wet coats and old, unwashed flesh and heavy with unwelcome memories. It had been almost 30 years since my last visit to the Brompton Oratory for Christmas Eve midnight Mass with Eric Douglas, the ne’er do well youngest son of Kirk and half-brother of Michael, when we were both asked to leave.

We had met a couple of days earlier when Eric was a guest on a radio programme I was producing, talking about growing up in Hollywood in a famous family and his own modest acting career. The three-hour show was a mixture of music and chat that was supposed to entertain the British forces overseas, in which my main role was to flatter the presenter and butter up the guests.

I shared the task of choosing them with a woman who had worked on a BBC arts programme and stuffed the show with practitioners of the high arts, while I filled the rest of the slots with politicians and writers I was curious to meet.

“That was Dame Ninette de Valois on a lifetime in dance,” the presenter would say. “This is Starship – Nothing’s Gonna Stop Us Now.”

Occasionally, I thought of the poor homesick squaddie in Port Stanley or the lonely naval rating in his bunk on the high seas who had to listen to all this, but not for long.

After the interview, Eric told me he was staying in London for Christmas with nothing to do and I said he was welcome to spend Christmas Eve with me and two friends visiting from Berlin. My friends and I were in our dissolute 20s and Eric was not much older, and we charged hard into partying at his Park Lane hotel, forgetting to eat as our pupils enlarged, our confidence welled, our conversation became more absurd.

At about 11, Eric announced that he felt both Jewish and Catholic and that we should all go to midnight Mass at the Brompton Oratory, which is not only one of the biggest and most ornate Catholic churches in London but also boasts one of the best choirs.

I knew it was a mistake soon after we arrived, as Eric and the others fidgeted through the first few hymns until they noticed that various young men were darting in and out of darkened passages to our left.

“Look,” Eric said, revealing that among the many elements of acting he missed at drama school was how to modulate his voice.

As he and my friends babbled, my efforts to shush them became louder, provoking a white-haired man in front of me to turn around, his face puce with indignation.

Catholicism is out of fashion in England, with numbers falling off sharply after 1993

Eric started to protest but I yanked him up and we walked back down the aisle to the door, my embarrassment deepening as I passed each row of reproachful faces. Still, it’s hard to forgive anyone an injury you’ve done them and we soon persuaded ourselves that even if the old gent’s outrage was justified, he didn’t have to be so nasty about it. Besides, Eric added, they were cruising.

Catholicism is out of fashion in England, with numbers reaching a peak in 1993 before falling off sharply after that. Sunday worshippers halved between 1970 and 2014, falling from 1.9 million to 850,000 and the number of priests fell by almost half. A report this month found that just 17 per cent of British Catholics between the ages of 16 and 29 attend church every week and one in five say they never go at all.

The church is doing its best to turn the tide, releasing an app called God Calls earlier this year to help users deepen their faith and to encourage vocations. It includes daily prayers and meditations on the Gospel and the lives of the saints, as well as a news section and a Twitter feed.

It follows the introduction in Scotland of the Catholic App, which helps you find the nearest Mass and confessions and which has been nicknamed Sindr.

That Christmas was the last time I met Eric, who died in 2004 of “acute intoxication” with alcohol, tranquillisers and painkillers after years struggling with addiction, during which he visited more than 20 rehab clinics.

Standing before a blaze of votive candles at the oratory the other day, I was about to light one for him when my eye was caught by a movement in the shadows that made me wonder if he had been right all along.