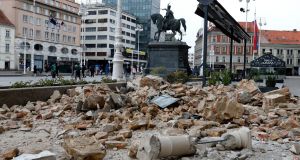 General view of the damage in the streets following an earthquake in Zagreb, on Sunday. An magnitude 5.3 earthquake has shaken Croatia damaging buildings and cutting off electricity in a number of neighborhoods. Photograph: Antonio Bat/EPA 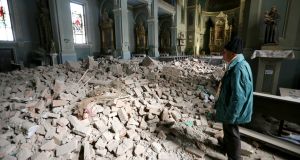 A man looks at damages at the Basilica of the Heart of Jesus, following an earthquake in Zagreb on Sunday. Photograph: Antonio Bronic/Reuters

A 5.3 magnitude earthquake in Croatia has injured at least 17 people, caused significant damage to the capital, Zagreb, and complicated the country’s fight against the coronavirus outbreak.

The quake struck at 6.23am on Sunday and sent people running in panic from their homes into the streets of Zagreb, despite cold weather and calls from the authorities to maintain “social distancing” and avoid crowds to counter the spread of Covid-19.

Many buildings were damaged and a number of parked cars were crushed by falling masonry in the city centre, while patients in some hospitals – including mothers and their newborn babies in a maternity clinic – were forced outside by the initial quake and at least two aftershocks; a 15-year-old girl was in a critical condition after being rescued from one collapsed apartment block.

Officials announced that soldiers were joining the clean-up effort as hundreds of emergency and council workers checked the safety of stricken buildings, put out fires and restored power supplies to districts hit by blackouts.

The quake was the biggest to strike Zagreb in 140 years, and it snapped a spire on the landmark cathedral that was ruined by the 1880 tremor.

“We have two crisis situations which contradict each other. The message was to stay at home,” Croatian prime minister Andrej Plenkovic said of advice related to Covid-19, which is known to have infected 235 people in the country of 4 million.

“We are urging all citizens to be extra careful. We are recommending staying outside for now. No need for panic ... and maintain the distance recommended because of the coronavirus epidemic,” he added in a morning press conference.

“The Croatian army and all Zagreb city services have been engaged in repairing the damage. We will endeavour to repair the roads as soon as possible. We will have a particular focus on [fixing] healthcare facilities, because we want patients to have all the proper care they need.”

Health minister Vili Beros, who announced confirmation of 29 new Covid-19 cases in Croatia on Sunday, urged people to stay at least two-metres apart: “Earthquakes are dangerous,” he said, “but coronavirus is even more so.”

Later on Sunday, with freezing temperatures expected overnight, Zagreb mayor Milan Bandic said most of the city’s residents should go back home.

“Eighty per cent of Zagreb residents live in ... reinforced concrete structures, and I ask them to return to their homes. There would have to be a double earthquake to demolish these buildings. That has never happened in history,” he said.

Croats reportedly donated warm clothes, blankets and other supplies to help those whose homes were destroyed or deemed unsafe, and emergency workers set up several points around Zagreb where people could get free food.

The EU was quick to offer assistance to member state Croatia, amid sharp criticism from neighbouring Serbia that the bloc had not done enough to help candidate countries in the Balkans fight Covid-19.

“My thoughts are with the people of Croatia ... the EU stands with our friends and is ready to offer help and assistance,” said European Council president Charles Michel.