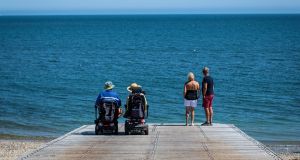 The Met Office has issued a heatwave warning and advised people in Britain to stay out of the sun for the rest of the week, as it confirmed that Monday was the hottest day of the year so far.

The level three, amber heat health watch warning acts as an alert to health providers that extreme temperatures are on the way, which may affect the wellbeing of people in the UK.

The warning applies from 9am on Monday to 9am on Friday in the midlands, southeast England and east England. It means there is a 90 per cent probability that temperatures will hit 30 degrees Celsius during the day and 15 degrees at night for at least two days during that period.

The Met Office said that a temperature of 33.3 degrees had been recorded on Monday at Santon Downham in Suffolk, making it the hottest day of the year so far. The previous highest had been 33 degrees, recorded at Porthmadog in north Wales on June 28th.

A Met Office spokeswoman said: “Away from northern England, dry and sunny weather should dominate through the week, but interspersed with heavy showers in afternoon and evening periods.

“Temperatures will be very warm or hot; very hot in the east. Thresholds could be breached in places from Monday onwards, with very warm and muggy overnight conditions.”

The average daily maximum temperature from June 1st to July 16th was 20.9 degrees, much higher than expected at this time of year, prompting the Met Office to predict this summer (June 1st to August 31st) could be record-breaking. Even if temperatures for the rest of July and August are average, it will still be one of the 10 hottest summers on record.

The Met Office advice for this week states: “Stay out of the sun. Keep your home as cool as possible – shading windows and shutting them during the day may help. Open them when it is cooler at night. Keep drinking fluids. If there’s anybody you know, for example an older person living on their own, who might be at special risk, make sure they know what to do.”

A hosepipe ban is due to come into effect in northwest England on August 5th.

The UK’s Environment Agency has said water supplies in the rest of England should be sufficient if resources are managed properly. However, it said the drop in river levels posed a threat to wildlife.

Several places in the UK have had 54 consecutive dry days, starting on May 30th, the Met Office said. Some places have had less than 1mm of rain in that entire period – the longest such spell since 1969, when 70 days passed with no significant rainfall.

The Met Office classifies less than 1mm of rain in a day as a “dry day”. – Guardian

Trump threatens to withhold funds from ‘China-centric’ WHO 07:21
Trump says economy ready to go ‘like a rocketship’ as deaths climb 21:59
Coronavirus: France is fourth country to register more than 10,000 deaths 20:16
Boris Johnson in stable condition as UK records biggest daily death toll 19:03
Coronavirus: Sweden to enact crisis powers but hold them in reserve 18:57