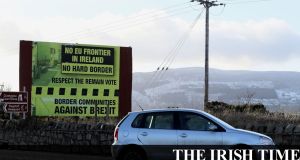 A sign, erected by Border Communities Against Brexit, outside Newry, Co Down. Photograph: Brian Lawless/PA Wire

All potential British solutions to the post-Brexit Border are fraught with difficulty and would leave smaller businesses struggling to cope, UK experts have said, as leaked British government papers outline major concerns just two months before Britain is due to leave the EU.

A report summarising the findings of the British government’s official “alternative arrangements” working groups concluded that there are issues with all the scenarios put forward to try to replace the backstop arrangement. There are also specific concerns over whether any technological solution could be delivered to monitor cross-Border trade.

Critics said the paper, seen by the Guardian, should “ring alarm bells” across government over how likely it is that alternative arrangements to the backstop will be found.

The dossier marked “official-sensitive” prepared for the EU Exit Negotiations Board is dated August 28th. It details how the findings of all advisory groups informing the government on the Border are being kept deliberately under wraps to try to avoid hampering Britain’s intended renegotiation of the backstop agreed to by former prime minister Theresa May.

Alternative systems to avoid a hard border after Brexit have become the central tenet of prime minister Boris Johnson’s Brexit strategy. He sees this as a way of unlocking a new deal with Europe and has claimed that there are “abundant solutions”.

However, the damning report shows there is no single deliverable solution at present, despite the fact Mr Johnson is almost a third of the way through the “30 days” target that the German chancellor, Angela Merkel, gave him to come up with a fresh Border proposal.

The report said: “It is evident that every facilitation has concerns and issues related to them. The complexity of combining them into something more systemic and as part of one package is a key missing factor at present.”

Mr Johnson’s claim that a hard border could be avoided with mobile checks of livestock and crops was dismissed by experts as the most unlikely option to work. The report said: “Overall there were a number of concerns surrounding the deliverability of technological facilitations.”

Questions were also raised over whether a trusted trader scheme - the current favourite for a Border solution - would require infrastructure to set it up.

MP Tom Brake, the Liberal Democrat Brexit spokesman, said: “As we continue to get closer to 31 October, with Boris Johnson attempting to shut down our democracy, this leaked document rings alarm bells. It proves the government has no deliverable solution to the Irish Border, let alone being able to find one within the next few weeks.

“The fact that in this document there is not a single option that can be put forward to the EU as a viable alternative to the backstop, and that No 10 do not want to release these findings as they know Boris Johnson’s bluff will be revealed, simply shows why MPs must come together to stop no deal.”

The official report summarises the work of two groups tasked with coming up with Border ideas: advisory groups involving agricultural and food experts, customs and legal specialists and senior Northern Irish figures; and a Whitehall-based group which is due to shortly come up with a negotiating position on how to rework the withdrawal agreement to present to the EU.

Border solutions the report deems as having the most potential are listed as:
Regulatory and industry assurance schemes.
Trusted trader schemes.
Smarter risking (a technological solution that involves data sharing).

A Northern Ireland sanitary and phytosanitary zone to track contamination and disease.

There were significant concerns about an artificial intelligence option, which experts felt might not detect disease and chemical contamination of food.

Onboard vehicle technology which could track the location, weight and temperature of goods was also considered risky if a lorry might suddenly be taken out of service and goods offloaded into a non-registered vehicle.

Physical goods checks through mobile units could take weeks and involve lengthy periods of quarantine, the report found. The units could also be vulnerable to “targeting” and staff could be at risk, it said.

Significantly, smaller businesses in Northern Ireland could suffer through the additional administration required to send and receive goods across the Border, as well as other constraints and costs, the report found. They might also struggle with data collection or be unwilling to share information due to concerns around privacy.

“This is because they do not have the existing systems in place and are more likely to have non-standardised products and product ranges,” it said.

On keeping the work around Border solutions secret as the government prepares to go back to the EU to discuss the withdrawal agreement, the report said: “DExEU [the Department for Exiting the European Union] has been considering whether a paper consolidating the findings from all of the advisory groups should be published in late September/early October.

“However, we and other departments have cautioned against this given the potential negative impacts on the renegotiation with the EU and we understand No 10 are in agreement ?”

A spokesperson for the DExEU said: “We don’t comment on leaked documents.”

Over the weekend, the Minister for Foreign Affairs Simon Coveney said Ireland would not agree to drop the backstop merely for the “political convenience” of the British prime minister.

He said dropping the backstop would only create problems for Ireland further down the line. “I’m not going to pretend to people that we can do that for political convenience now to get a deal, and then find that Irish politics is dominated by the Border issue indefinitely into the future. We’re not doing that,” he said.–Guardian