Pro-independence parties at loggerheads over decision, with snap election possible 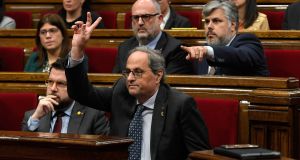 Catalan president Quim Torra asks for the floor during a plenary session at the parliament of Catalonia on Monday, in Barcelona. Photograph: Lluis Gene/AFP via Getty Images

Catalonia’s parliament has accepted a judicial ruling stripping the region’s president, Quim Torra, of his seat in a move that has divided the independence movement and could lead to a snap election.

Last month, a court in Barcelona found Mr Torra guilty of disobedience for refusing to remove pro-independence propaganda from the façade of his government’s building during an election campaign last year. His sentence included an 18-month ban from public office, which the national electoral board decided should be implemented immediately, regardless of any appeal process.

On Monday, the Catalan parliament’s presiding council accepted that Mr Torra should be stripped of his seat.

The presiding council’s decision was seen as a test of the unity of the pro-independence Catalan government, a coalition made up of Mr Torra’s Together for Catalonia (JxCat) and the Catalan Republican Left (ERC).

ERC hoped to avoid making this issue yet another cause of strife between the Catalan government and Madrid. ERC’s abstention in the recent investiture vote of Socialist Pedro Sánchez helped him form a new Spanish administration, thawing bilateral relations somewhat.

Parliamentary speaker Roger Torrent, of ERC, oversaw the presiding council meeting in which it was agreed that Mr Torra should lose his seat. In defending the decision, ERC’s spokesman Sergi Sabrià warned against “sterile disobedience” which could hurt the independence movement in the longer term.

However, JxCat’s opposition to the decision was made clear by Mr Torra, in a parliamentary debate afterwards.

“I trust that parliament will correct this irregularity immediately,” he said, calling on Mr Torrent to reinstate him as a member of parliament. “If it does not, the continuity of our institutions will be at risk.”

Members of the unionist Ciudadanos party then chanted “Criminal, criminal” at Mr Torra, causing the session to be suspended for several minutes. Ciudadanos and the conservative Popular Party believe Mr Torra should step down as president immediately.

By law, only someone holding a parliamentary seat can be chosen as president. However, the loss of that seat does not necessarily mean forfeiting the presidency and both ERC and JxCat insist that for now, at least, Mr Torra should remain as Catalan leader.

Nonetheless, the clash between Catalonia’s coalition partners increases the likelihood of the regional government collapsing and the calling of a snap election. This development also comes just days before Mr Torra was due to meet with Mr Sánchez at the start of a series of negotiations between the two governments.

The Spanish government has insisted that a meeting will still take place.

“When the moment comes, the prime minister will meet with whoever is at that moment Catalan president, with whoever the [Catalan] parliament has chosen,” said Cristina Narbona, president of Mr Sánchez’s Socialist Party.

Monday’s drama came the day before six pro-independence Catalan politicians who were jailed for sedition are due to be allowed into the regional parliament as part of a probe into the Spanish government’s introduction of direct rule in 2017. Among those scheduled to attend is former Catalan vice-president Oriol Junqueras.

1 Why Sinn Féin will not call the State by its name
2 Jury finds Harvey Weinstein guilty of sexual assault, rape
3 Coronavirus: Irish citizens advised not to travel to Italy’s affected areas
4 Maureen Dowd: For the White House parasite, all restraint has gone
5 Snow and ice warning issued as communities battle floods
Real news has value SUBSCRIBE