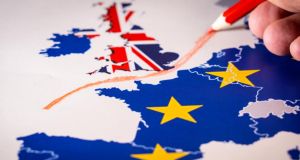 The problem is that this unity of national purpose functions within a nation that does not actually exist: non-metropolitan England and parts of English-speaking Wales. Photograph: iStock

We know what the week running up to the glorious day of Brexit is supposed to be like. A few nights before the original chosen date of March 29th, 2019, Boris Johnson was “in conversation” with his old boss at the Telegraph, Charles Moore, at Methodist Central Hall in Westminster. Johnson was out of office then, and free to indulge himself without constraint.

He told the audience that this “was meant to be the week when church bells were rung, coins struck, stamps issued and bonfires lit to send beacons of freedom from hilltop to hilltop. This was the Friday when Charles Moore’s retainers were meant to be weaving through the moonlit lanes of Sussex, half blind with scrumpy, singing Brexit shanties at the tops of their voices and beating the hedgerows with staves.”

Moore replied that Johnson was right, “but in fact I had already stood these good people down, since I could see what was coming”.

Britain is not and never has been a nation state

This was incestuous Old Etonian/Old Telegraphian joshing, though if anyone on the Remain side of the argument had characterised Leave supporters, even in jest, as drunken yokels, there would have been no end to the outrage. But it is telling nonetheless.

It points to one of the great underlying difficulties of Brexit’s Independence Day. It poses as a moment of national liberation, a people freeing itself from the oppression of an alien empire. But what “people” are being liberated?

During the referendum campaign in 2016, Johnson puzzled many of his own supporters by claiming Brexit itself as, of all things, “the great project of European liberalism”. This may be like claiming puritanism as the great project of sexual liberation, but it does make a superficial kind of sense.

The central idea of Brexit is indeed part of 18th- and 19th-century European culture: the nation state as the primary locus of political loyalty and as the collective manifestation of a unified “people”. Brexit has to present itself in these terms: a suppressed people rising up, as Jacob Rees-Mogg puts it, to set itself “free of the heavy yoke of the European Union”.

But here there is a great irony: Britain is not and never has been a nation state. For most of its history as a state, it has been at the heart not of a national polity, but of a vast multinational and polyglot empire. And the UK is itself a four-nation amalgam of England, Scotland, Wales and Northern Ireland.

Once you establish nationalism as the core value of politics, where do you stop?

There is no single pre-EU UK “nation” to return to. There is no unified “people” to whom power is being returned. And this is the contradiction that the Brexit project cannot even acknowledge, let alone resolve.

Scotland and Northern Ireland rejected Brexit even more emphatically in the general election of 2019 than they had done in the referendum of 2016 and a clear majority of voters in the UK as a whole voted in 2019 for parties that promised a second referendum and an opportunity to stay in the EU. So while Johnson likes to talk of January 31st as “this pivotal moment in our national story”, there is neither a settled nation nor a shared story. Brexit is not Northern Ireland’s story.

It is not Scotland’s story. It is not even London’s story. It is the national origin myth of the place that Anthony Barnett, co-founder of openDemocracy, calls “England without London”.

There is no doubt that Brexit has worked in the way that nationalist movements try to – it has united people across great divides of social class and geography in the name of a transcendent identity. Many of those people, if not quite drunk on scrumpy and bawling Brexit shanties, will feel real joy on January 31st.

But the problem is that this unity of national purpose functions within a nation that does not actually exist: non-metropolitan England and parts of English-speaking Wales. And it is purchased at the very high price of creating much deeper divisions between England-without-London and the rest of the British-Irish archipelago.

There is a particular paradox here when we think back on that great Brexit slogan: take back control. It is that the parts of the UK that have actually “taken back control” into their own local democratic institutions reject Brexit; while the parts that support Brexit have no such institutions.

The Scottish parliament, the Welsh Senedd and the Northern Ireland assembly have all voted overwhelmingly in recent weeks to reject the withdrawal agreement. (Their votes will of course be ignored by the government in London.)

But the voters in England who actually want Brexit are not recognised at all as a “people” with a voice of their own. They are nationalist revolutionaries without a political nation. They are creating a country for themselves, but it is one that dare not speak its name.

At the heart of this dilemma is the illusion that a fragile multinational state can play with the fire of nationalism yet not get burned. The allure of leaving a larger multinational political entity and going your own way is very potent.

But once you establish it as the core value of politics, where do you stop? Brexit sets in motion the logic that shared sovereignty is unnatural and that all “peoples” must return to the pure dominion of their ancient nations.

However, it then commands the tide of separatism to stop at the current borders of the UK. It dictates that the nation must take back control of its own fate in order to inaugurate for itself what Johnson and Rees-Mogg unblushingly hail as a “golden age”.

But apparently the only nation that is supposed to hear this thrilling call of destiny is the new England that has been conjured into being. You would need to be half blind on scrumpy not to see the fatal contradiction. – Guardian