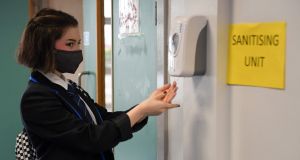 A pupil returns to school at Holyrood secondary school in Glasgow on August 12th. Photograph: Andy Buchanan/AFP via Getty Images

Britain’s education secretary has insisted the government is following the “best scientific and medical advice” after announcing a U-turn on guidance in England for face coverings in schools.

Gavin Williamson said an “extra precautionary measure” had been put in place with the updated guidance – issued on Tuesday evening – that says face coverings should be worn in communal areas of schools in locations that have been placed under local lockdown.

The move followed pressure from teaching unions, which called for clarity before pupils return to school next week, and an announcement from Scotland that all secondary pupils there will be required to wear masks in between lessons.

On Monday, England’s deputy chief medical officer, Jenny Harries, said the evidence on whether children over 12 should wear masks in schools was “not strong”.

Mr Williamson later reiterated that masks were not required due to extra measures being adopted by schools, while a spokesman for prime minister Boris Johnson said there were no plans to review the guidance.

Pressed on whether the government had followed Scotland into the decision, he said: “As you highlighted, what Jenny did highlight, was that we shouldn’t be bringing mandatory face coverings in communal areas right across the country into every secondary school.

“And that’s not what we’re doing, but we are recognising the fact that there are certain areas of the country where there’s a high instance of, or higher instance, of coronavirus, that we’re taking an extra precautionary measure.”

Mr Williamson said the government was following recommendations by the World Health Organisation, which advised that masks should be worn by children over the age of 12.

Guidance published on Wednesday says that in local lockdown areas, and in schools with students in Year 7 and above, face coverings should be worn by adults and pupils in corridors and communal spaces.

Measures in parts of northern England are expected to continue when they are reviewed on Thursday but could be more tightly targeted and focused on smaller areas, suggesting areas in lockdown could be subject to change.

Guidance says schools will need to communicate arrangements over face coverings “quickly and clearly” to staff, parents and pupils if new local restrictions are imposed. Face coverings do not need to be worn in classrooms, as other protective measures will already be in place and they might affect learning, according to the guidance.

Exemptions include those who cannot put on, wear or remove a face covering because of a physical or mental illness or impairment or disability.

Teachers in England have now been given clarity on the rules surrounding the use of face masks, according to Geoff Barton, general secretary of the Association of School & College Leaders (ASCL).

He told BBC Breakfast: “We now know that if you are in an area of high risk you will have to wear a face covering if you are in secondary school. If you are not in a high area of risk, then it will be at the discretion of your school or your college.

But Labour described the latest measure as a “half-baked U-turn”, arguing that face coverings should have been made compulsory in communal areas and that the buck had been passed back to schools.

Post-primary pupils in Northern Ireland will be asked to wear face coverings in corridors and other communal areas, Stormont’s education minister Peter Weir said on Tuesday. The official guidance comes into effect on August 31st when schools there return on a full-time basis.

Welsh health minister Vaughan Gething said a decision on schoolchildren wearing face coverings will be made on Wednesday, but current guidance says masks are not being recommended. – PA