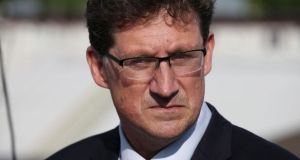 Eamon Ryan said there was a lack of transparency around Phil Hogan’s movements around Ireland. Photograph: Nick Bradshaw 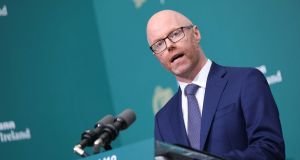 Green Party leader Eamon Ryan has said the Government had lost confidence in EU Commissioner Phil Hogan because of the lack of immediate transparency and communication from him.

Mr Ryan told RTÉ radio’s Morning Ireland that the Government would respect any decision made by EU Commission President Ursula von der Leyen so that “we can all move on” and focus on critical economic and international policy issues.

Mr Hogan had breached public health advice by attending the event in Clifden, when there was clear Government advice to avoid large congregations, aid Mr Ryan. The Commissioner had not been not free to travel around the country, despite having a negative Covid-19 test, he added.

Minister for Health Stephen Donnelly has said that the Oireachtas Golf Society event in Clifden had been “an absolute disgrace” and “a slap in the face” for the public.

Mr Donnelly called on EU commissioner Phil Hogan to “listen to the Taoiseach and Tánaiste” and to consider resigning because of the controversy from the event.

Speaking on RTÉ radio’s Morning Ireland, Mr Donnelly said that the commissioner should consider his position as the fall-out from the event had eroded public confidence in Covid-19 public health measures.

“What happened in Galway is an absolute disgrace. It is a slap in the face for every man woman and family who has made sacrifices in so many different ways.”

Later on the same programme Green Party leader and Minister Transport, Climate Action and Communications Networks, Eamon Ryan said that Mr Hogan had clearly breached public health guidelines but that ultimately it was up to the European Commission President Ursula von der Leyen to adjudicate.

The Government had lost confidence in Mr Hogan, he said. It was important that the Government’s views on the matter be expressed clearly.

“No one wants to be in this position.”

European Commission president Ursula von der Leyen had requested details from Mr Hogan of his movements in Ireland prior to his attendance at an Oireachtas Golf Society dinner which appeared to contravene Covid-19 guidelines.

In a statement on Tuesday night, the leaders of the three Government parties said that “concerns remain” about Mr Hogan’s movements after arriving in Ireland last month and the manner in which he has explained them.

Senior sources confirmed it remained the view of the Government that Mr Hogan should resign as commissioner, and it is understood that Dr von der Leyen is aware of this.

Mr Ryan said Mr Hogan was accountable to Dr von der Leyen and not the Government and it was up to her to make a decision on his future.

Social Democrats co-leader Róisín Shortall earlier said that statements from Mr Hogan about his movements around Ireland while he should have been in self-isolation had raised more questions and had not provided answers.

The commissioner had lost the confidence of the public with his “cavalier” attitude, she told RTÉ radio’s Morning Ireland.

Ms Shortall said she believed his position was untenable and he needed to do the right thing and step down.

“The longer this goes on it is bringing the country into disrepute.”

The controversies of the last week in relation to the breaches of guidelines that Mr Hogan had engaged in were a distraction from the Government’s response to Covid-19, she added.

“It is unfair at the very least for the commissioner to continue this controversy.”

“His behaviour is completely unacceptable.”

Ms Shortall said that the “drip feeding” of information meant that what information had been received to date was “incomplete and inconsistent.”