Vaccine development in covid-era has been accelerated 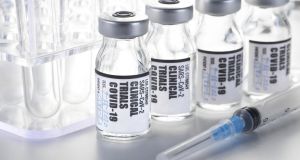 The European pharmaceutical industry’s vaccines lobby has pushed the EU for exemptions that would protect its members from lawsuits if there are problems with any new coronavirus vaccines, according to people with knowledge of the discussions and an internal memo seen by the Financial Times.

The pandemic has compressed into months vaccine research and development that can take years. Some potential vaccines are already at the phase-three testing stage - the last step before they come to regulators for approval. At the same time, governments around the world have poured cash into research and development to try to save lives and prevent economically crippling lockdowns.

“The speed and scale of development and rollout do mean that it is impossible to generate the same amount of underlying evidence that normally would be available through extensive clinical trials and healthcare providers building experience,” reads a memo circulated to members by Vaccines Europe, a division of the European Federation of Pharmaceutical Industries and Associations.

The document says that this creates “inevitable” risks.

For this reason, Vaccines Europe said in its memo it was advocating a “comprehensive no-fault and non-adversarial compensation system, and an exemption from civil liability”.

Responding to queries from the FT, the European Commission said that because of the pandemic, it needed to act as quickly as possible while safeguarding patient safety.

It added that any suggestion that contracts it was negotiating would not respect the rules in its Product Liability Directive were “categorically false”.

But it also said it was making provision for the EU’s 27 member states to indemnify vaccine companies for “certain liabilities” via advance purchase deals it had struck and was seeking to make on their behalf.

It said it was doing this “in order to compensate for such high risks taken by manufacturers”.

Vaccines Europe represents drugmakers including AstraZeneca, GlaxoSmithKline, Janssen (which belongs to Johnson & Johnson), Merck, Novavax, Pfizer, Sanofi, Takeda, Abbott and CureVac. Several of these companies are in advanced talks with the EU over vaccine supplies, while some have already reached agreements with either the US or the EU.

Nathalie Moll, the head of Efpia, said it and its members were in talks with authorities on a compensation framework in case of vaccine problems “to get the right level of compensation to the right patient when they need it”.

According to the Vaccines Europe memo, some people are likely to suffer “adverse events” after vaccination. “Even if such events may in fact not be related to the vaccines, such occurrences combined with the sheer scale of the vaccination programme and public attention to Covid-19, could lead to numerous damage claims.”

Yannis Natsis, who sits as an elected member in charge of patient representation on the board of the European Medicines Agency, told the Financial Times that an exemption from civil liability would create “a dangerous precedent” that could have ramifications beyond the pandemic.

“Such deviations will undermine people’s confidence in vaccines,” he said. “Governments need to resist pharma pressure and be transparent.”

Efforts by drugmakers to push for a blanket exemption from civil liability have been partially successful, according to people familiar with those discussions. While liability exemptions are common in the US, this is not the case in Europe.

Last month, Reuters reported that AstraZeneca had secured exemption from future product liability claims on its vaccine candidate, which it is developing in partnership with the University of Oxford, citing a company executive who would not name the countries. AstraZeneca has struck a supply deal with the EU and with other countries. The company declined to comment.

Separately on Monday, the European Commission said it had concluded exploratory talks with Moderna over the supply of its vaccine.

The FT reported last month that Moderna had been pitching its vaccine in a range of $50 to $60 a two-dose course. According to a person familiar with the talks, it is asking the EU for about €20 a dose. The price agreed for the AstraZeneca vaccine is about $3 a dose. –Copyright The Financial Times Limited 2020