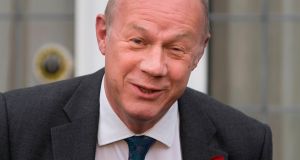 Theresa May’s most senior minister has condemned claims by a former police chief that pornographic material was found on one of his Commons computers.

The Sunday Times reported that ex-Metropolitan Police assistant commissioner Bob Quick alleged the material was discovered by officers during an inquiry into government leaks in 2008.

However, British first secretary of State Damian Green, who is effectively Mrs May’s deputy, has strongly denied the claims.

However, Mr Green said: “This story is completely untrue and comes from a tainted and untrustworthy source.

“I’ve been aware for some years that the discredited former assistant commissioner Bob Quick has tried to cause me political damage by leaking false information about the raid on my parliamentary office.

“No newspaper has printed this story due to the complete lack of any evidence.

“It is well known that Quick, who was forced to apologise for alleging that the Conservative Party was trying to undermine him, harbours deep resentment about his press treatment during the time of my investigation.

“More importantly, the police have never suggested to me that improper material was found on my parliamentary computer, nor did I have a ‘private’ computer, as has been claimed.

“The allegations about the material and computer, now nine years old, are false, disreputable political smears from a discredited police officer acting in flagrant breach of his duty to keep the details of police investigations confidential, and amount to little more than an unscrupulous character assassination.”

Mr Quick resigned his post with the Metropolitan Police in 2009 after he was photographed entering Downing Street carrying a secret briefing note on which details of the undercover operation could be seen.

The former anti-terror chief is set to give evidence to a Whitehall inquiry launched into Mr Green’s behaviour after a woman alleged that he made inappropriate advances to her.

The Cabinet Office inquiry was triggered after Kate Maltby, who is three decades younger than the Mr Green, told the Times that Mr Green “fleetingly” touched her knee during a meeting in a Waterloo pub in 2015, and a year later sent her a “suggestive” text message after she was pictured wearing a corset in the newspaper.