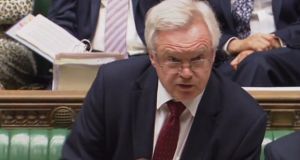 Britain guarantees “without any qualification” to retain the common travel area with Ireland after it leaves the European Union, Brexit secretary David Davis has told the House of Commons. Speaking at the start of a two-day debate on a Bill authorising Theresa May to trigger article 50 of the Lisbon Treaty, Mr Davis said the position of Northern Ireland, the peace process and all related issues were at the forefront of the prime minister’s mind.

“It will be at the forefront of my mind, which is why we have, without any qualification whatever, guaranteed the retention of the common travel area,” he said.

Mr Davis said the government took very seriously the Northern Ireland Executive’s analysis of the impact of Brexit on industries in Northern Ireland, including issues such as the single Irish energy market.

Labour MP Conor McGinn has tabled two amendments to the Bill, which would commit the government to maintaining the current status and rights of Irish citizens in the UK, and the provisions of the Belfast Agreement. These include the free movement of people, goods and services on the island of Ireland; citizenship rights; North-South institutions; human rights and equality; the principle of consent; and the status of the Irish language.

DUP MP Ian Paisley said the Republic should be concerned about the prospect of remaining in the EU when both of its biggest export markets, the United States and the UK, would be outside it.

“They should be getting out along with us,” he said.

Former chancellor Kenneth Clarke gave a passionate defence of his decision to vote against triggering article 50, arguing that, despite the outcome of last year’s referendum, EU membership remained in Britain’s interest. Joining the common market had, he said, rescued Britain from the “appalling state” after the loss of its empire, with no role in the world and a failing economy.

“I believe that our membership of the European Union restored to us our national self-confidence and gave us a political role in the world, as a leading member of the Union, which made us more valuable to our allies such as the United States, and made our rivals, such as the Russians, take us more seriously because of our leadership role in the European Union. It helped to reinforce our own values as well,” he said.

Mr Clarke said the issues of membership of the single market and the customs union had not been addressed in the referendum campaign and must be thoroughly debated by MPs, and he was sceptical about the prospect of securing good, bilateral trade deals after leaving the EU. The former chancellor is the only Conservative expected to vote against the Bill but a number of Labour MPs have said they will defy their party whip to vote against triggering article 50.

Labour has proposed a number of amendments, which would oblige the government to consult parliament and the devolved administrations during the negotiations and to maintain protection of workers’ rights and the environment. Shadow Brexit secretary Keir Starmer acknowledged that the issue was difficult for Labour, because its support for remaining in the EU was part of its identity as an internationalist party.